Footballers sustain injuries ahead of Rio

Footballers sustain injuries ahead of Rio 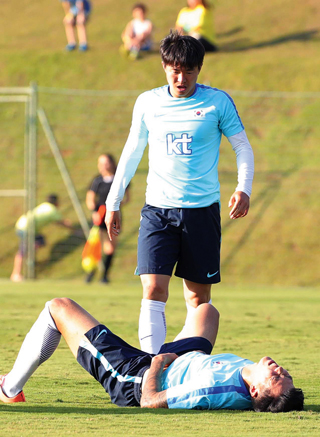 Korean striker Suk Hyun-jun writhes in pain after being tackled by an Iraqi player during a pickup game on Sunday in Sao Paulo, Brazil. Suk sustained bruised ribs while his teammate Lee Chan-dong sprained his ankle. [JOINT PRESS CORPS]

The practice game against the Iraqi national team at the Bourbon Atibaia Convention & Spa Resort was supposed to be a light pre-Olympics tune-up. Manager Shin Tae-yong did not anticipate the match would leave two of his players out of preparations just a week before the Games are to start.

The severity of the injuries was not immediately known following the game. The players were diagnosed at a local hospital, the Korea Football Association (KFA) said in an announcement in Seoul on Tuesday.

Suk is one of the Korean team’s three wild cards. In the Olympics, up to three overage players are allowed to compete in the under-23 competition.

Suk started out Sunday’s match as the squad’s lone striker. The 1.90-meter (6-foot-3) player is well known for his capacity to handle physical brawls on the pitch, but the match turned out to be more physical than expected. Suk went down after taking a hard tackle from and was substituted out of the game immediately with defensive back Kim Min-tae.

Shortly after, just before half time, midfielder Lee Chan-dong hurt his right ankle in a tussle and was relieved by Lee Chang-min. Lee Chan-dong was diagnosed with a sprained ankle the next day.

“I ordered the players not to care too much about the score and watch for injuries,” manager Shin said. “Despite what I said, we came out with two injuries, and this worries me.”

The team has another pickup match against Sweden on Friday in Sao Paulo. “I was expecting Suk to play a full game against Iraq as well as Sweden,” Shin said. “I am concerned that the injury might negatively affect his conditioning.”

Injuries have been an issue for Shin and the Olympics football team from the very start.

Defensive back Song Ju-hun was included in the initial roster announced in late June, but was taken out on July 17 when he fractured his left toe while playing for his club in the Japanese league.

Shin picked Kim Min-tae as a replacement, but the absence of an experienced player like Song, who has notched 23 games with the U-23 national team, is a difficult gap to fill.

“When younger players play in a large stage such as the Olympics, they often push themselves beyond their limit and get hurt,” said Ulsan University football team manager Yoo Sang-chul, who played in both the 2000 and 2004 Olympics. “If they don’t want to blow up everything they had worked toward for so many years, they need to learn self-control.”

The Korean team, which won bronze during the last Olympics in London, will play Fiji on Aug. 4, Germany on Aug. 7 and Mexico on Aug. 10 during the preliminary stage.

“We still have the pickup game against Sweden, but what’s more important is the first match against Fiji,” Shin said. “As long as we stick to our game plan and build the team up before the Games start, we should come out with good results.”

The KFA also announced Tuesday that Jang Hyun-soo, another wild card pick, was selected as the captain.

“It is a privilege to be able to lead the team as its captain in a large stage like the Olympics,” the 25-year-old defender said. “Our goal is to earn a medal. Teamwork will be vital.”

Besides Suk and Jang, Son Heung-min, an offensive midfielder from the English Premier League’s Tottenham Hotspur, is also on the Olympics squad as a wild card. Son was picked by FIFA on Tuesday as one of the upstarts to watch during the Rio Olympics. The world governing body called Son “the undoubted star of the Asian squads.”

FIFA also selected Brazil’s Neymar and Nigeria’s John Obi Mikel for the list. Neymar in particular was named as the “main attraction” for football fans around the globe this summer.