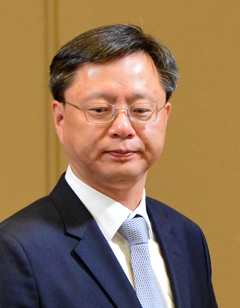 A scandal-plagued senior aide to President Park Geun-hye has become the first target of an investigation by a special inspector under a newly established system to root out corruption among high-ranking officials.

A so-called special inspection will investigate Woo Byung-woo, senior civil affairs secretary to the president, a source from the office of the independent inspector-general told the JoongAng Ilbo on Tuesday. Woo is the first target of a special inspection since the system was introduced last year.

“Woo’s son allegedly received special treatment while serving as a conscript police, and Woo was accused of using his wife’s company to understate his and his family assets when making his public servant’s asset disclosure,” the source said. “We view the accusations as worth investigating.”

“Of the various accusations against Woo, we have some evidence to prove the allegations that he gave favors in a promotion and that he understated his assets,” another official told the JoongAng Ilbo, indicating that the special inspection’s scope will include many of the accusation surrounding Woo and Jin Kyung-joon.

Jin, the first director-level prosecutor detained in a corruption investigation, is a friend of Woo. Woo, as a civil affairs senior secretary, was accused of having detected Jin’s irregularities during the vetting process for his promotion last year but ignored them.

The independent inspector-general has the right to investigate suspected irregularities that took place only after Woo assumed his current post.

The investigation, therefore, won’t look into a dubious sale of Woo’s wife’s land to Nexon in 2011. Jin, accused of receiving enormous bribes from Nexon, was suspected of arranging the deal. Woo has denied the charge.

Woo joined the Blue House as civil affairs secretary in 2014 and was promoted to the senior secretary post last year. If the inspection finds evidence for the accusations, the inspector will ask prosecutors to further investigate the case. The independent inspection has a one-month mandate, and it can be extended with the president’s approval.

On his way to his office, Lee told local media that he started the inspection last weekend. The inspector is required to brief the president at the beginning and end of the probe, indicating that Park is aware of the investigation. Opposition parties condemned the special inspection as a belated move intended to give Woo an out.

“It is belated and it is an attempt to buy time,” said Rep. Park Jie-won, floor leader of the opposition People’s Party. “Under the current law, the inspection won’t look into the dubious real estate deal. This is pointless.”

Rep. Woo Sang-ho, floor leader of the main opposition Minjoo Party of Korea, criticized Park for resisting demands to fire Woo. “Unless Woo steps down at the end of July or early August, the National Assembly will take the matter into its hands,” he said. “The legislature will start a process to investigate the scandal.”

While some adversaries of the president in her own ruling Saenuri Party demanded Woo’s resignation, the party tried to keep its distance from the case. “It is natural that the independent inspector-general launched a probe, and we will wait and see the outcome,” said Saenuri Party spokesman Rep. Min Kyung-wook.