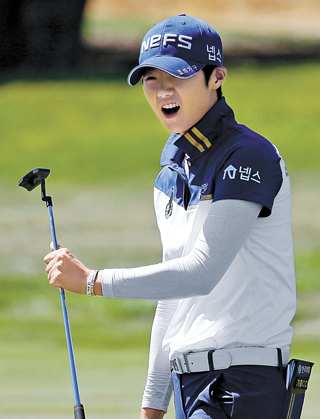 Park Sung-hyun will be competing at the Ricoh Women’s British Open this weekend in Milton Keynes, England. [AP/NEWSIS]

Park is yet to earn full LPGA membership but has played in four circuit events under invitation this year. Among the four events, she finished in the top 10 three times, including finishing third at the U.S. Women’s Open.

Park has accumulated $384,781 so far this season on the U.S.-based tour, putting her in the top 25 of the LPGA Money List. According to Category 10 of the LPGA priority list, a non-member who earns an amount of money “that is equal to or greater than the amount of official money won by the Member who was in 40th place on the Money List at that time” may be given LPGA membership.

Park could accomplish this feat after the Women’s British Open.

Pernilla Lindberg, a Swedish golfer who placed 40th on the Money List last year, earned about $410,000, and insiders believe it will be more or less the same this year. If Park can finish within the top 20 at this weekend’s event and earn over $30,000, she is likely to seal her membership in the LPGA. The total purse for the British Open is $3 million.

Based on her past performance, the odds are in Park’s favor. She has always placed in the top 20 in the LPGA events she has participated in this year. Park’s worst performance was tying for 13th at the JTBC Founders Cup in March.

Park left for England on Monday to prepare for the major event this weekend. Immediately following the U.S. Women’s Open, she played in the KLPGA’s BMW Ladies Championship but withdrew from the tournament during the second round, citing dizziness.

Since then, she has focused on recuperating and bringing herself back to peak physical condition. In preparation for the Women’s British Open, Park skipped a KLPGA event last weekend, the inaugural MY Moonyoung Queens Park Championship.

“I don’t think I am quite ready to go to the LPGA,” Park said during an interview with the Korea JoongAng Daily in mid-July. “But one day, I would like to top the LPGA money list. I also want to place within the top 10 in the world rankings.”

The JTBC Golf channel will air the first and second round of the Women’s British Open today and tomorrow at 5:30 p.m. Korea time. The third and fourth round will air on July 30 and 31 at 9:45 p.m. Korea time.