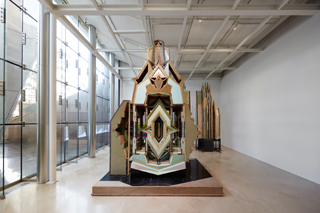 To Aug. 14: This exhibition features 12 pieces by Chinese artist Liu Wei, ranging from his controversial early works to his most recent pieces. The 44-year-old is one of the leading artists in the generation that came after the famous “Chinese Diaspora” and “Political Pop” generations influenced by the 1989 Tiananmen Square protests.

The exhibition will be the last at Plateau, a branch of the Samsung Museum of Art, as it’s located in the Samsung Life building that was recently sold and will close after 17 years.

To Aug. 14: The large-scale retrospective of the modern Korean master Kim Whanki (1913-74) features 400 paintings, drawings and collages by the artist.

Among the exhibits are many abstract drawings and oil paintings on newspaper that show the artist’s continued experimentation and transition into pure abstract figuration. The result was Kim’s famous dot paintings, which are now celebrated both by art critics and collectors. These paintings are also among the exhibits. 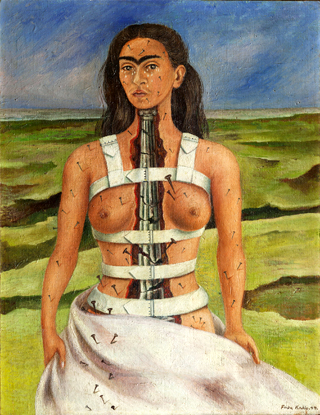 To Aug. 28: For this exhibit, organized to introduce Korean audiences to celebrated Mexican artists Frida Kahlo and her husband Diego Rivera, the Dolores Olmedo Museum of Mexico collaborated with the Seoul Arts Center.

A total of 150 pieces are on display, including paintings, drawings, photographs and several pieces of Kahlo’s clothing.

Both are motivated by her involvement in a serious bus accident in 1927 that left her in pain until her death. In “The Bus,” she recalls the hour just before the accident. “The Broken Column”, shown above, is a self-portrait of Kahlo showing both her pain and strong will to live.

To Aug. 28: The daily lives of both commoners and scholars spanning 500 years during the Joseon Dynasty (1392-1910) can be witnessed in this exhibition, the Kansong Art Museum’s sixth show at the DDP.

On display are about 80 genre and figure paintings by 33 famous Joseon artists, including Kim Hong-do, a versatile court painter famous for a wide variety of paintings, and Shin Yun-bok, famous for his paintings of women. The exhibits also include some contemporary pieces. Media artist Lee Lee-nam recreated Kim Hong-do’s painting “Hearing a Birdsong on Horseback” as a work of media art that even includes the sounds of birds chipping. Admission is 8,000 won. The gallery is closed on Mondays. Go to Dongdaemun History and Culture Park Station, line Nos. 2, 4 and 5, exits 1 and 2. 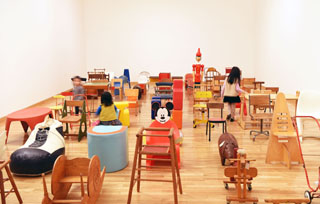 To Sept. 11: This exhibition features a large array of furniture for children, focusing on chairs and desks by internationally influential 20th-century designers including Peter Keler, Luigi Colani and Renate Muller, as well as some contemporary works by Korean designers. Visitors are allowed to sit on most of the chairs on display.

Designs from Korean artists and brands are displayed on the second floor of the museum, while the basement floor is dedicated to a diverse collection of desks and chairs for young students that date back to 1930.

However, the highlight of the exhibition for kids will be the ball pit on the first floor. Here, kids can take off their shoes and play while parents take more time to look around the exhibition.

To Oct. 23: The exhibition intends to show the creative process of British star designer Thomas Heatherwick and his team, who are famous for the iconic U.K. pavilion for the 2010 Shanghai Expo in China and the Olympic cauldron for the 2012 London Summer Games.

The show features an extensive archive of 1:1 scale prototypes, models, test pieces, drawings and photographs for their hit works that also include the Rolling Bridge in London, the Learning Hub building in Singapore and the new London bus.

Curated by Kate Goodwin, the Drue Heinz Curator of Architecture at the Royal Academy of Arts in London, the exhibition has toured different cities around the world, but according to the museum, the version for Seoul is a little different. Heatherwick’s famous Spun chairs have been specially produced for this exhibition to spin automatically. Admission is 8,000 won for adults. The museum is closed on Mondays. It is located at Dokseodang-ro 29-gil in Yongsan District, central Seoul. There is no nearby subway station. (070) 5097-0020,