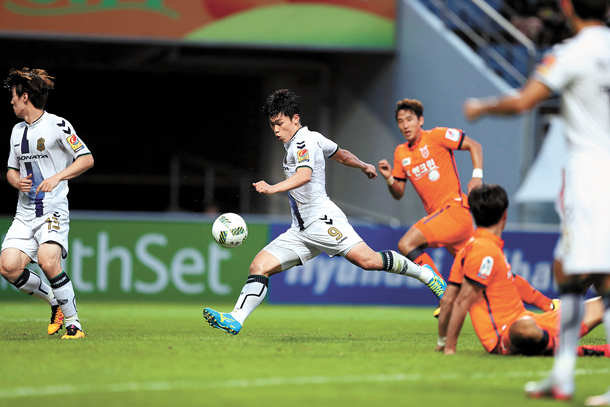 Jeonbuk Hyundai Motors’ Lee Jong-ho takes a shot during a match against Jeju United FC on July 16. Lee tallied one goal and an assist during the game. [KOREA FOOTBALL ASSOCIATION]

At the beginning of the football season, there were many concerns about Lee Jong-ho’s transfer from the Jeonnam Dragons to the powerhouse Jeonbuk Hyundai Motors. Some said he should have never made the move, that it was a mistake akin to a small fish swimming into a sea of sharks that could jeopardize his entire career.

But Lee stood his ground among the team’s powerful players, and now six months after his transfer, he is one of Jeonbuk’s top performers, living up to the nickname that K-League Classic fans have given him: the “Gwangyang Rooney.”

Lee garnered a reputation as a power kicker when he was growing up in his native Gwangyang, South Jeolla. By the time he was enrolled at Gwangyang Jecheol High School, the forward was already considered a potential star of the K-League Classic’s next generation. His bold and physical plays up front reminded opponents and spectators of Manchester United’s Wayne Rooney, earning him the nickname “Gwangyang Rooney.”

After Lee decided to don the Jeonbuk uniform this season, expectations were high for the 24-year-old forward. Jeonbuk had gone on a hiring spree during the winter transfer window in an effort to create the best squad in the K-League.

Despite the anticipation, Lee did not have much to show for it in the beginning, perhaps intimidated by the large pool of talent that Jeonbuk had accumulated. But as the season went on, his performance improved. His first goal came toward the end of the season’s first half in June, during a game against the Suwon Samsung Bluewings in which he was named man of the match. In the past eight K-League games, Lee has scored four goals.

Jeonbuk welcomed his revival. After the team’s star striker, Lee Dong-gook, injured his hamstring toward the end of June, Jeonbuk called in “Gwangyang Rooney” to fill in.

Lee’s latest goal came during a match on the road against the Jeju United FC on July 16, when he played as the team’s starting forward. In the 32nd minute, he drilled a shot past Jeju’s goal line. After Jeonbuk conceded an equalizer, it was an assist by Lee to his teammate Lopes Pereira Ricardo that helped Jeonbuk clinch the game.

The team remains the only undefeated club in this season’s K-League Classic and has matched its past record in number of undefeated matches at 22. If Jeonbuk wins against Gwangju FC this weekend, it will set a new record of 23 undefeated games in a row.

At this pace, Lee has a high chance of getting on the national team roster. Manager Uli Stielike will be attending K-League games this summer to observe possible candidates for the national team, which will be competing in September in the final round of the regional qualifications for the 2018 World Cup in Russia.

Stielike has a rather strict philosophy when it comes to choosing his players. No matter where they compete, whether the English Premier League or K-League, Stielike often opts for players who see consistent playing time and excel in their respective clubs. That is why some players in Europe such as Lee Chung-yong of Crystal Palace were excluded from the roster during the national team’s European tour in early June.

Lee has already played for Stielike once, when he competed in the 2015 East Asian Cup. He played in games against China and North Korea and scored one goal for the team.

He has not had an opportunity to play under Stielike since then, with Suk Hyun-jun of FC Porto, Hwang Ui-jo of Seongnam FC and Lee Jeong-hyup of Ulsan Hyundai FC having been the manager’s favorites in recent years.

But with Hwang and Lee Jeong-hyup struggling in the league this season, the “Gwangyang Rooney” has a chance once more at donning the national team jersey. It all comes down to how he does during the remainder of the K-League season.