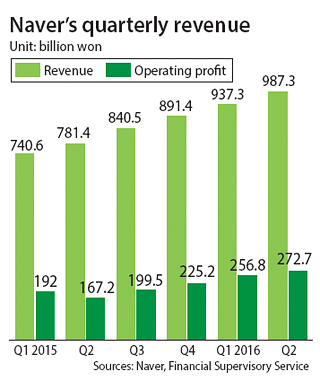 An analyst from Meritz Securities had predicted the company might surpass 1 trillion won in quarterly earnings. However, that did not happen. “My forecast missed as Naver’s earnings from stickers and game sales slowed down in the second quarter compared to the previous quarter,” said Kim Dong-hee.

“But if Naver releases new games and keep rallying with its advertising earnings, quarterly revenue of more than 1 trillion won may still be possible during the latter half of the year.”

For now, Naver will focus on developing global players like Line.

“Stable sales growth from overseas advertising revenue in the second quarter and expansion of our mobile service users lifted performance for the second quarter,” said Naver CEO Kim Sang-hun. “To expand our overseas markets we will continue our challenges to foster new apps that could become the second- and third-generation model of Line app.”

Line Corp. reported 33.9 billion yen ($30 million) in revenue, a 20.6 percent growth. Its operating profit was 8 billion yen, reversing a loss a year before.