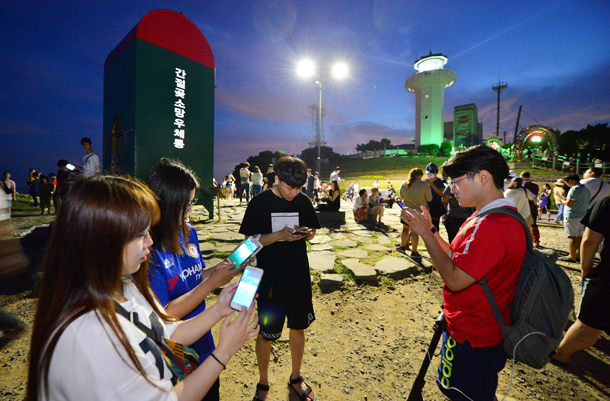 Recently, I took my son to Sokcho as he wanted to play Pokémon Go. I had some safety concerns, but we found a safer way to play. He caught Pokémon while I drove around. From the Mishiryeong tunnel to the Daepo Harbor in Sokcho, he caught about 10 Pokémon. At the Daepo Harbor, he caught some 30 more.

While the map service was not officially provided, I could easily understand how it worked. Who created this game? John Hanke is the CEO of Niantic Labs, which developed Pokémon Go, and he was the creator of Google Earth, offering satellite map images around the world. Augmented reality (AR), which combines virtual images, real images and location information services, is not actually a new invention. Nine years ago, in May 2007, I covered the HP Mobility Summit in Shanghai, China. HP wished to expand the PDA market and introduced a new technology called “mscape.” It combined GPS and user created contents. For instance, if a user passes by certain landmarks carrying a mobile device, he can see various content created by other users relevant to the place. HP planted information on some landmarks in Shanghai and had journalists experience mscape.

While I thought it was a good idea, I’ve never heard that mscape became commercialized. HP had surpassed competitor Dell and became the top computer maker in the world at the time. It was too much to expect an industry leader to go for a drastic transformation. But what would have happened if HP decided to become a content service provider at that time?

It is too early to tell who will benefit the most from the Pokémon Go craze. Some say the intellectual property of the Pokémon franchise is the winner while others pay attention to the AR technology. It is also noteworthy that Niantic offers location-based services to the world. In Korea, Pororo Go is being developed. While it is unclear how what kind of product it will be, simply imitating Pokémon Go won’t lead to much success.

Just like any new service, the instant success could diminish soon unless there is a working profit model. I met a fish restaurant owner at Daepo Harbor who said, “It is easy to catch Pokémon around here. Why don’t you have dinner at my restaurant?” Restaurants that are known for frequent appearances of popular Pokémon like Pikachu will enjoy good business. Stores might even pay to make Pokémon appear in the vicinity. It is not just about Pokémon. There will be demands willing to pay money to attract customers. The final winner of the Pokémon Go boom will be the developer or company that respond to such demands.


*The author is a deputy business editor of the JoongAng Ilbo.