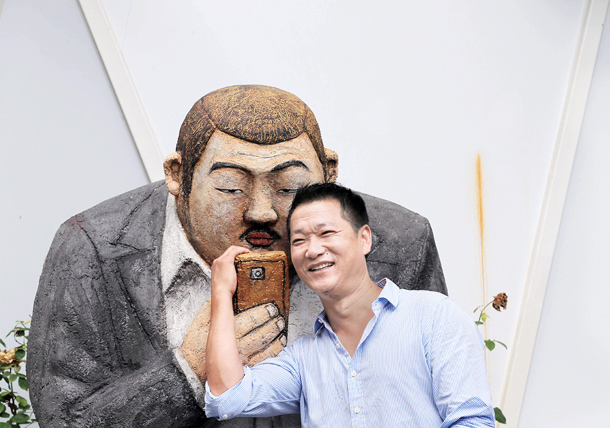 Park Dong-hoon, the head of Hands BTL Media Group, poses next to a sculpture called “Smart Man” by artist Kim Won-keun, which stands in front of his company building.[SHIN IN-SEOP]

Beside a quiet alley filled with old printing houses in Jung District, central Seoul, stands a container in which sketches of various plants and animals are arranged to create a shape of an outstretched bird’s wing.

“What does ‘nature’ mean in contemporary society and what does it mean to be natural?” asks the description of the piece, written on the glass of the container. The work, which artist Kang Joo-lee named “Chaos,” bears another tag that reads “Seventh Street Museum - Container.”

Not far from the container, a number of sculptures of muscular men stand in front of a few buildings. This work, called “Smart Man,” was created by artist Kim Won-keun. The building next to the sculptures is covered with a painting of a bird in a dark blue sky. The painting blends so naturally with the surroundings that the building is almost camouflaged against the sky. This piece, called “Fly High into the Sky,” was created by artist Han Seong-pil.

“Aren’t these work amusing?” asks Park Dong-hoon, the head of Hands BTL Media Group. “It’s odd how all these works with such strong personality blend so well with the village.”

For the last three years, the 52-year-old Park has been pouring his own assets into reviving Pil-dong in Jung District by filling the place with art. He has worked and lived near Chungmu-ro, a place renowned for its flourishing art and film industries, and in Pil-dong, for over 30 years.

When he was young, he lived in Sancheong District in Southern Gyeongsang. After completing his middle school education, he followed his mother, who went to Seoul to earn money. His mother was a street vendor who sold Korean-style pancakes filled with brown sugar while he picked up waste papers on the streets of Chungmu-ro and worked in a Chinese restaurant as a delivery man. Later, he took a job in a press house.

While he attended Duksoo High School, his teacher suggested he study in a high school specializing in art education, so he transferred to Yerim Art High School, now called Seoul Art High School. But Park couldn’t afford to pay the tuition and thus gave up his studies in 11th grade.

“After dropping out of high school I worked in an animation company in Chungmu-ro,” said Park. “After three years of working I got tired of it, and while I was looking into running a restaurant I coincidentally got to work in a design-related field in an advertising company.”

He added, “This village is like a parent who raised me, as well as a teacher.”

In 1992, Park found POP Hands, the predecessor of the advertising company he currently operates. He was not picky with his job. He took up every task he could, making advertisements for food and electric companies as well as taking charge of stores’ PR works.

Thanks to his endeavor the company’s annual revenue reached 9 billion won ($8 million) and he hired some 50 employees. In 2012, he even built his company building in Pil-dong.

“On the completion day of the building I was sitting in my office and then I suddenly thought, ‘Did I really achieve all of this by myself?’” recalled Park. “Then I thought since this alley, this village, has made me who I am now, I should also give something in return.”

As soon as he made up his mind, he went to the community center and started working in the local resident’s committee. He learned that during the Joseon Dynasty (1392-1910), Namhakdang, a government-run educational institution, and Jujaso, where metal printing type was made, were both in Pil-dong. He also learned that in the modern era, film, advertisement, photography and printing industries flourished in the area.

After learning of Pil-dong’s past, Park contemplated how to bring back some culture and art to the area. While walking around the streets and sketching pictures, he suddenly came up with the idea to place art on streets where there used to be scrap papers and garbage.

In 2014, he set up the first street museum, called Motungi, or “Edge,” in front of his company building. After that, he stationed a total of eight art exhibition places, some of which have Korean names that mean “Well,” “Connection,” “Nest” and “Square with Four Sides.”

These museums display a variety of art ranging from paintings to sculptures, and the works change every three months.

“Local residents weren’t welcoming about the change at first,” said Park. “But now they all are curious what art will be displayed next.”

He has also created public spaces, such as the one right in front of his company building where people can read books as well as hold lectures. Next to this scholarly space he also opened a concert hall called Cocoon Music where new musicians may perform their works. The first village festival was held at the concert hall in May and the second is planned for September.

“My heart fills with passion when I see little kids stop for a moment and admire the art on the streets,” said Park, his eyes fixed at the art outside.