Seoulites treated to a bevy of summer events

Seoulites treated to a bevy of summer events 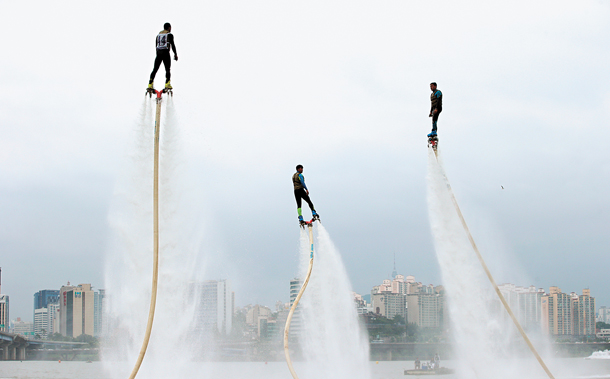 Flyboarders test their gear on the Han River on July 17 in preparation for events at the Hangang Summer Festival, which hosts 80 programs including camping, wakeboard contests, jazz concerts, outdoor movies and all-night marathons until August 21 at 11 Han River parks in Seoul. [PARK JONG-KEUN]

More Seoulites like Kim Jin-soo, a 27-year-old office worker who works and lives in Seoul, are finding the city an unexpected destination for a weekend getaway.

“I used to think entertainment programs organized by the city were somewhat below par,” Kim said, “but that changed last year when I saw performances like the traditional martial arts Taekkyeon at the Hangang Summer Festival. I’m looking forward to watching movies under a bridge in a Han River park this year.”

The Hangang Summer Festival, hosted by the Seoul Metropolitan Government annually since 2013, runs more than 80 programs through August 21.

For those looking for more than just a view of the Han River, families and friends are invited to take part in a paper boat racing event at the river on August 6 and 7. The event drew some 2,600 people last year, especially since its popularity soared after the SBS reality program “Running Man” and KBS2 reality program “The Return of Superman” aired the event with TV personalities and the triplets of actor Song Il-gook.

Instead of tossing and turning in bed on hot summer nights, Seoul residents can go on an all-night stroll through Han River parks this weekend. In the Hangang Night Walk 42K, participants can choose between a 42-kilometer (26-mile) or a 25-kilometer course, and walk the night away with friends and families.

For those who are more into running than walking, the popular Electro Dash marathon on August 6 involves an overnight marathon in Yeouido Hangang Park culminating in bright neon color powders and an EDM concert. The entry fee is 50,000 won and reservations can be made at electrodash.co.kr.

And of course no summer festival would be complete without slip ‘n’ slides. Slide the City, a giant inflated vinyl slide festival that has toured 200 cities, is coming to Seoul this year. The 150-meter long slide will be set up at the Ttukseom Hangang Park from Saturday to August 15, and also at Sinchon, western Seoul, on August 13 and 14. The tickets, which vary in price from 20,000 won to 30,000 won depending on the hours, can be purchased at slidethecity.co.kr.

Concerts and romantic movie nights are being scheduled, too.

From August 12 to 14, the Hangang Blanket Film Festival comes to Yeouido Hangang Park, where moviegoers can snuggle in their blankets and watch horror, slapstick comedy and romantic movies.

Reservations can be made at facebook.com/ebulmovie by messaging the manager, and choosing a theater among multi-theater, couple-theater, horror-theater and all-night-theater.

Horror theatergoers are encouraged to dress up in costumes and makeup.

The theaters under Wonhyo, Cheongdam, Cheonho and Seongsan bridges are also open until August 20, screening movies for free at 8:00 p.m. every Saturday.

For avid jazz fans, the popular Jarasum International Jazz Festival crew will be joining other bands for a night of jazz on August 6 and 7 at the Moonlight Square of Banpo Hangang Park. Open from 6:00 p.m. to 10:00 p.m., the concert is open to anyone who needs to rekindle that jazz groove.

And last but not least, residents of Seoul can enjoy the World Night Market in Yeouido Hangang Park on Wednesdays and weekends to try food from all over the world. Some 100 food trucks will be lined under four different themes, namely, Korea, Asia, Latin America and Europe, while disco, ballad, hip-hop and folk music will complete the night market atmosphere.