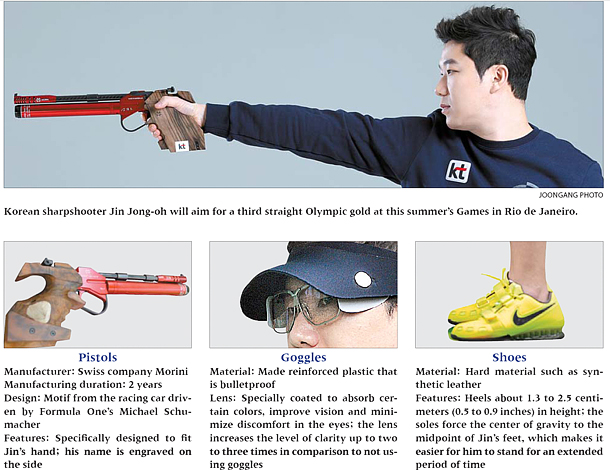 Korean shooter Jin Jong-oh has a weapon no one else in the world possesses - a special-edition gun that was made for him and him alone.

Jin aims to leave his legacy in the world of shooting by taking his third Olympic gold this summer, and he plans to do it with the help of a trustworthy partner - his CM162 EI, a gun that he will use for the 10-meter (32-foot) air pistol event. The pistol was specially made for Jin by Morini, a Switzerland-based gun manufacturer.

The reason Morini made the gun is simple: Jin is the best shooter in the world at the moment and the No. 1 deserves the best.

When football stars such as Cristiano Ronaldo or Lionel Messi wear a certain brand of shoe or boot, these become global hits, and similarly, other shooters around the world will be looking for the exact same equipment Jin uses in competitions because they know the best shooter uses only the best gear.

The CM162 EI, which Jin has been using since the Olympic qualifications in April, is designed with a motif from the racing car that German Formula One driver Michael Schumacher races in.

Like Schumacher’s car, the pistol is covered in fire red from the cartridge chamber to its muzzle, in stark contrast to other guns spotted at Rio, most of which are silver or black in color. The gun has the phrase “No. 1 Jin Jong-oh” engraved on its side. Among anything else, the gun is carefully manufactured to perfectly fit Jin, as demonstrated in the manufacturing duration which took nearly two years.

The CM 84E, the gun that Jin will use for the 50-meter pistol event, is also a bespoke weapon. Morini had Jin visit its headquarters in Switzerland last year to create a perfectly personalized piece of equipment for the Korean shooter.

Like the “Smart Pistol,” a gun that can only be triggered once authenticated with the user’s fingerprint, the grip of Jin’s gun is based on the shape of Jin’s hand. It is so intricately designed that Jin does not need to put much pressure on the trigger to fire it. His world record in the 50-meter event, “583 points,” which he earned in 2014 in Spain, is engraved on its side.

Normally, the price of weapons used in the 10-meter air pistol event ranges from 2.3 million won ($2,075) to 2.7 million won. The price of a 50-meter pistol is about 3.5 million won. However, Jin’s weapons have no price tags on them as they are limited edition that no one else in the world has.

“These gears are specifically made just for me, and I trust them,” Jin said. “I have confidence that I can perform at my peak level as long as I myself don’t make a mistake.”

“Whenever I am in an international competition, other shooters look at my guns with envy,” Jin added. “It’s nice to know that I can intimidate my opponents not just with records but with my gear, as well.”

He added, “I hope this gun can be displayed in a museum one day as a piece of equipment that has set numerous world and Olympic records.”

As Jin guns to bring home his third consecutive Olympic gold medal this summer, his pistols will be his most trusted allies.