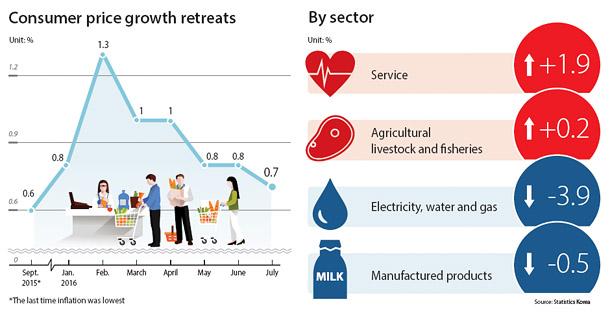 Consumer prices increased less than 1 percent for a third straight month in July, marking the lowest inflation rate in 10 months.

According to Statistics Korea on Tuesday, a fall in crude oil prices was one of the main causes for the modest inflation rate.

In July, the country’s consumer prices rose 0.7 percent year on year, the lowest growth rate since last September, when the figure recorded 0.6 percent.

Petroleum prices fell 8.9 percent in July compared to the previous year, mirroring the fall in international crude prices. That contributed to bringing down overall inflation by 0.38 percentage points.

“The fall in crude oil prices not only impacted the price of petroleum products but also dragged down the overall prices for electricity, water and gas,” said Yoo Young-je, a director at Statistics Korea.

In fact, the price of gasoline and diesel fell 9 percent and 8.4 percent each in July compared to a year ago. This helped overall prices for electricity, water and gas drop by 3.9 percent and contributed to bringing down overall inflation by another 0.18 percentage points.

“The inflation rate only rose 0.7 percent last month, but it would have been near the mid-1 percent level if oil prices were higher,” said Kim Dae-yoo, an official at the statistics agency. Kim pointed out that the energy sector dragged down the overall inflation rate by some 0.6 percentage points.

The average price of Dubai crude oil fell to as low as $20 a barrel earlier this year, but it has been going up since to near the $40 level. However, that is still about $10 lower than it was last year at this time.

“Experts are projecting crude oil prices will go up later this year, and we expect that it will have less impact on lowering the inflation rate in general in the second half of the year,” said Yoo Soo-young, a director at the Ministry of Strategy and Finance.

According to the Finance Ministry, the average price of Dubai crude will rise from $37 per barrel in the first half of this year to $47 a barrel in the second half.

The price of Korean beef, or hanwoo, rose 17.3 percent, and that of garlic went up 32.1 percent. White radish prices fell 23.5 percent, and scallion prices dropped 22.4 percent from a year ago.

The price of the staple Korean liquor soju sold in restaurants and bars rose 13.2 percent, and the prices of raw fish meals at restaurants increased 4.9 percent, according to Statistics Korea.

By region, consumer prices increased the most in Seoul and Busan, by 1 percent, followed by Jeju Island (0.9 percent) and Daegu (0.8 percent). The inflation rate was the lowest in Gumi, South Gyeongsang, where it recorded negative 0.1 percent in July.

Meanwhile, the Finance Ministry said the government will do its best to improve the economic data in the second half of this year and minimize the impacts coming from various factors that might drag down the inflation rate.

“We will push forward the supplementary budget and will monitor uncertainties thoroughly to deal with factors that push down the inflation rate,” said Yoo at the Finance Ministry.