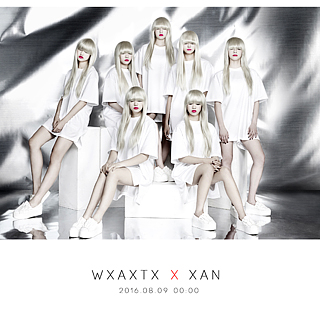 Female act I.O.I unveiled a mysterious teaser image along with an announcement about an upcoming album through their official Facebook on Tuesday.

The photo shows the group’s seven members, all of whom are wearing the same outfit, makeup and blond wigs covering their eyes. Below, the numbers “2016.08.09 00:00” are written, hinting at the release date.

Around three songs are expected to be included in the upcoming album, according to a report by the local media outlet mydaily.

I.O.I is a temporary girl group born out of the survival audition program “Produce 101,” which aired in the early part of this year.

The group consists of 11 members, but only seven will be taking part in the upcoming album.

I.O.I has so far released several songs such as “Dream Girls” and “Crush,” which earned them great popularity. Despite their rising fame, the group will disband in January 2017 as scheduled.