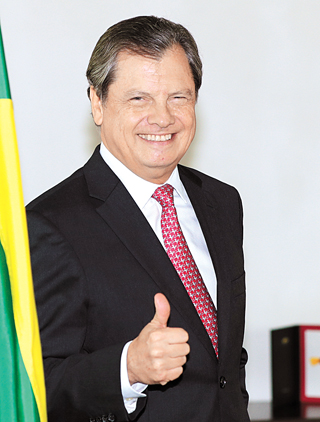 With the global festival that is the Olympics starting tomorrow, Korean time, Serra hopes visitors will be able to enjoy the beauty and joy presented by his beloved city, Rio de Janeiro.

“I was born in Rio,” said Serra during his interview with the JoongAng Ilbo. “[Rio is] called mother city. [It is] a wonderful city, considered one of the most beautiful cities in the world. A jewel of nature.”

Serra believes there is no better setting for the Olympic Games. “We are proud to organize it,” he said.

As proud as Serra is for his country to organize and host the Games, he is well aware of all the concerns about the city being highlighted by the media. But he says he can ensure the safety and health of whoever finds him or herself in Rio this August. “I don’t fear about security,” answered Serra when asked about the matter. “I know that police will be there. Maybe they are protesting now, but this is just to call attention to their pledges."

Serra particularly emphasized the amicable relationship Brazil has with over 100 countries around the world, and said this will ensure the safety and success during the Games.

In terms of the Zika epidemic, Serra mentioned the recent statement made by the World Health Organization, which said that the Zika problem during the Olympics will be small and manageable. According to a recent study that Serra referred to, Aedes mosquitos, the main carriers of the virus, will not be able to survive in temperatures lower than 28 degrees Celcius (82 degrees Fahrenheit).

“In winter in Rio [during the Olympics] at 4 a.m.,” said Serra, “the temperature can be as low as 14 degrees so the mosquitoes are dead.”

The top Brazilian envoy to Korea is also optimistic about relations between Brazil and Korea. He says there are over 50,000 Koreans living in Brazil and the Brazilian people are becoming more and more aware about the growth that Korea achieved in the past several decades. “Brazilian people are driving Korean cars. Korean investments are creating jobs in Brazil,” Serra said. He added that the patterns of progress and achievement are an inspiration to many Brazilians.

Like most Brazilians, the Brazilian ambassador to Korea is an ardent football fan. “Botafogo!” he exclaimed, showing his passion and love for the Brazilian football club based in Botafogo, Rio de Janeiro. “I became a fan at the age of seven.”

Although Brazil, a global powerhouse when it comes to football with five World Cup titles which is more than any other nation in the world, has regularly appeared in the Summer Games, its attempts to take gold always fell short. During the last Olympics, the Brazilian national team finished as runner-up to Mexico. “I hope we will make it,” said Serra.

“The Christ the Redeemer statue, this is not just a symbol of Christianity but a token of Brazilian hospitality welcoming the world with open arms as the Christ the redeemer,” he said.