For some top athletes, high hopes mean loss is tough

For some top athletes, high hopes mean loss is tough 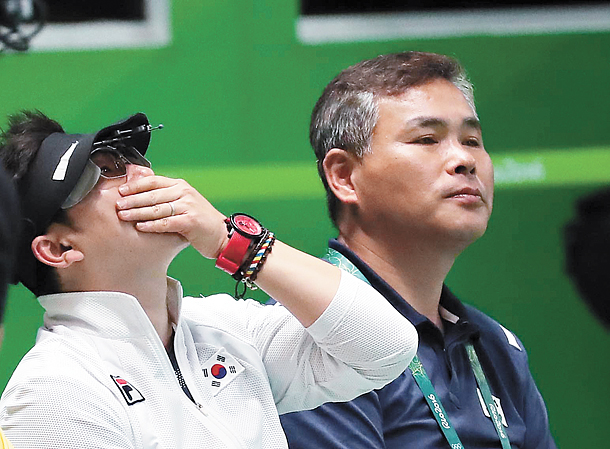 Jin Jong-oh, left, after failing to win any medals in the 10-meter pistol event on Saturday in Rio de Janeiro. [JOINT PRESS CORPS]

An unexpected turn of events caught Korea off guard during the first weekend of the 2016 Summer Olympics in Rio de Janeiro, as many athletes in events that were considered sure bets for gold failed to medal at all.

Perhaps the most surprising disappointment came from Jin Jong-oh, who topped the 10-meter air pistol and 50-meter pistol events during the 2012 London Olympics. The reigning gold medalist failed to defend his title in the 10-meter air pistol event at the Olympic Shooting Centre in Rio on Saturday, walking off the shooting range with no medal at all.

“I am sorry,” Jin muttered after the match as he scurried out of the mixed zone designated for the media.

All is not lost for Jin, though, as he still has the 50-meter pistol event on Wednesday. The event is considered one of his best, in which he claimed back-to-back golds in 2008 and 2012.

Korean fans were also watching star swimmer Park Tae-hwan for a possible gold medal. But he was quickly eliminated from the heats in his main event, 400-meter freestyle.

Park, who claimed gold and silver in the event in 2008 and 2012, had a bumpy ride to get to Rio this summer, fighting an exhausting legal dispute with the Korean Olympic Committee after his doping suspension by the International Swimming Federation. Park spent a significant amount of time and effort defending his spot on the national team, time and effort that otherwise could have been spent more productively on training.

At his age, 26, Park is considered old for a swimmer, and coupled with the lack of training leading up to the Games, he was unable to control his pace during the race. Park kept himself in the lead in the first 100 meters, after which he quickly fell behind, unable to make the last spurt that often won him a spot on the podium in past events.

“It hasn’t come home to me that I won’t be competing in the finals,” Park said after finding out he had been eliminated. “What do I do?”

Luckily, Park will have medal opportunities while competing in three other events in this year’s Games.

Another upset came from judoka Kim Won-jin, ranked No. 1 in the world in the 60-kilogram division. He was knocked out early in the competition during the quarterfinals, a shocker for Koreans who had high hopes for the men’s team, which includes four of the world’s top-ranking judokas.

In fencing, Shin A-lam, an epee fencer who suffered a controversial loss during the 2012 London Olympics, failed in her bid for redemption. Shin was defeated by Ukraine’s Olena Kryvytska in the round of 32 at Carioca Arena 3 in Rio.