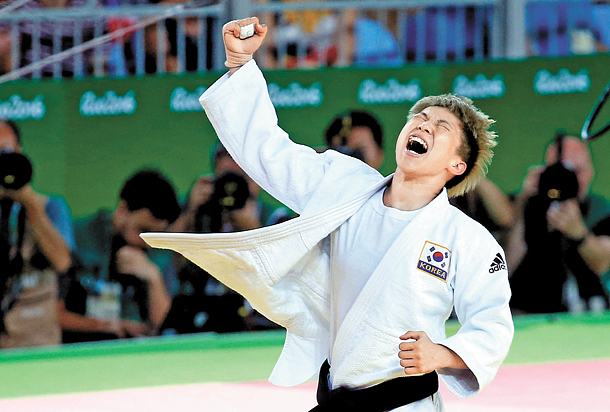 Jeong Bo-kyeong celebrates after taking a point against Cuba’s Dayaris Mestre Alvarez during the semifinals of the 48-kilogram judo event on Saturday at Carioca Arena 2 in Rio de Janeiro. Jeong eventually claimed silver from the event. [NEWSIS]

Before Saturday, no one thought of judoka Jeong Bo-kyeong as a possible contender for an Olympic medal. Ranked No. 9 in the world and making her first appearance in the Summer Games this year, the odds were against the 25-year-old athlete.

But Jeong beat expectations and became the first female Korean judoka in 20 years to win a medal in the Olympics. And she did it all with an injured finger.

While others in Team Korea were struggling on the Games’ first day to land a spot on the podium, it was Jeong who unexpectedly gave Korea its first medal, claiming silver in the women’s 48-kilogram judo event on Saturday at Carioca Arena 2 in Rio de Janeiro.

Jeong first stunned spectators when she toppled world No. 1 Urantsetseg Munkhbat of Mongolia earlier in the day during the quarterfinals. With nearly 20 medals on her shelf, Munkhbat is one of the most decorated judokas in the world at the moment, and Jeong was expected to be easy prey for the Mongolian on her way to the podium. But Jeong took an early lead with a shoulder throw and eventually beat Munkhbat on a penalty.

Jeong’s final match of the day was the gold medal bout against Paula Pareto, a 30-year-old judo veteran from Argentina and bronze medalist from the 2008 Beijing Olympics.

Ranked No. 3 in the world in the category, Pareto met Jeong last year during the 2015 World Judo Championships in Astana, Kazakhstan. Jeong at the time was looking to take her first win from an international competition, but her run came to a halt when Pareto beat her in the semifinals, leaving her to fight Ami Kondo of Japan in the bronze medal contest, which she won.

Facing Pareto again in the Olympic gold medal match on Saturday, Jeong was looking for revenge. Early in the fight, she tried to bring down the Argentinian with a shoulder throw, a move that Jeong is most well known for.

But the seasoned veteran Pareto did not flinch and controlled her pace in the match. Although she received a penalty for passivity, Pareto led the match comfortably to grab a half-point victory. Jeong fell to the ground overcome by emotion as Pareto threw her fists in the air, celebrating Argentina’s first Olympic gold in women’s judo.

Although Jeong’s shot at gold fell short, her achievement over the weekend has been heavily lauded by sports fans. A female Korean judoka has not seen a medal since the 1996 Summer Olympics in Atlanta, where Cho Min-sun won gold in 66-kilogram event. Above all else, Jeong fought her gold medal bout while battling an injury.

As soon as the match against Pareto began, Jeong sprained her right little finger. The judoka had sprained her finger during training about a week ago, and the injury did not completely heal in time for the Games.

“No parts of my body are intact,” said Jeong. Throughout the day, she was also fighting through pain on her left little toe, which she injured while training in Korea. She never had sufficient time to heal completely due to her continuous training.

Although Jeong has participated in international events since 2011, she has not had much success in any major events. She was considered a possible dark horse at best but never a favorite to win any medal.

Nevertheless, she worked doggedly leading up to the Olympics. “She is tenacious when it comes to training,” said Seo Jong-bok, the head coach of the Korean judo team. “If she cannot do something, she will practice over and over again until she can pull it off.”