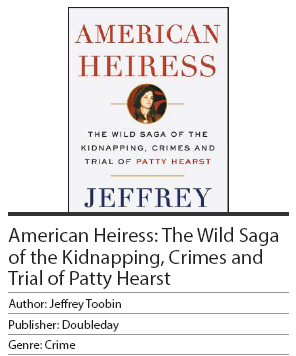 Earlier this year the well-known legal analyst Jeffrey Toobin won even wider attention for the FX series based on his 1996 best-seller about the O.J. Simpson trial, “The Run of His Life.”

This summer he has a terrific new book out about another lurid crime story with its own toxic mix of race, class, celebrity and sex.

He begins with her 1974 kidnapping by a small band of kooky, dangerous radicals called the Symbionese Liberation Army and proceeds to briskly narrate what happened next to the then 19-year-old college student: her decision to join her captors under the nom de guerre “Tania”; the nearly 18 months she spent on the lam; and her trial, conviction and eventual pardon on bank robbery charges.

The book ends with a brief look at what became of the principals in the bizarre, often horrifying saga in the decades since photos of the machine gun-toting heiress made the front page of newspapers.

Hearst, who married her bodyguard, Bernard Shaw, after prison, is now a 62-year-old widow, grandmother and sometime socialite in suburban Connecticut.

She made headlines again last year when her shih tzu won first prize in the toy dog category at the Westminster Kennel Club dog show.

Since her sensational story has been told many times before, including by Hearst herself in her 1981 memoir, “Every Secret Thing,” why tell it again? Two reasons come to mind: the changed mood in this country about terrorism after 9/11 and the national debate about income inequality.

For even though Hearst briefly embraced the SLA’s power-to-the-people slogans, in the end she remained true to her class, getting off lightly - she served less than two years - because of her family’s wealth and connections. “Notwithstanding a surreal detour in the 1970s, Patricia led the life for which she was destined,” Toobin astutely notes.

If anyone still wonders whether she was brainwashed in captivity, as her superstar defense lawyer F. Lee Bailey claimed during her trial, Toobin, as he did in the O.J. case, makes his own position perfectly clear. “Patricia Hearst was a woman who, through no fault of her own, fell in with bad people but then did bad things.”