‘Play’ around, the Korean way: SPAC uses performance styles from around the world to explore tradition

‘Play’ around, the Korean way: SPAC uses performance styles from around the world to explore tradition 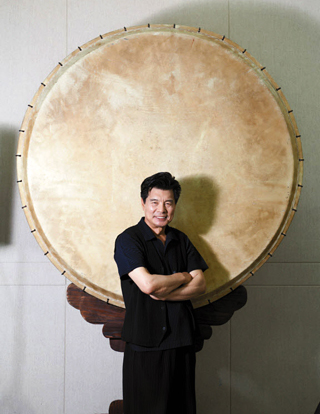 Choi Jong-sil, artistic director of the Seoul Performing Arts Company, stands in front of a daego, or large traditional Korean drum, which he had personally manufactured. [JEON HO-SUNG]

On a recent afternoon, sounds of unfamiliar musical instruments were resonating from a rehearsal studio of the Seoul Performing Arts Company (SPAC) inside the Seoul Arts Center in southern Seoul.

Sure enough, the members of SPAC were brushing up their skills on strange-looking foreign instruments like didgeridoos, a wind instrument developed by indigenous Australians, and a gamelan, an Indonesian ensemble that requires many people to use different instruments including metallophones, xylophones, drums, gongs, bamboo flutes and plucked strings.

To celebrate the 30th anniversary of the establishment of this performing arts group affiliated with the Culture Ministry, its artistic director Choi Jong-sil, who was appointed to the post last June, decided to create a performance from scratch that can “allow people from different parts of the world to come together and really learn to sing, dance and play the Korean way.”

Choi is the last remaining descendant of the Namsadang Nori troupe, a group of talented male entertainers who wandered across the country performing six pieces of nori, which translates literally to “playing” in Korean, in open-air venues during the Joseon Dynasty (1392-1910). The performances included singing, dancing, playing musical instruments, acrobatic feats, mask dances and even puppet plays. Namsadang Nori is Korea’s Important Intangible Cultural Property No. 3 and is also inscribed in Unesco’s Intangible Cultural Heritage of Humanity list.

With his Namsadang Nori heritage as well as experience as a life-long performer of pungmul (a Korean folk performance that includes drumming, dancing, and singing), Choi said he has created a show that combines performances from different parts of the world, “starting from southeast Asia, going through to Africa, Europe, South Africa and onto Broadway in New York.”

“I’ve brought together the regions’ distinctive dances, musical instruments and songs, and then mixed it harmoniously and added Korean color to it so that everyone from across the globe can come together and really have fun,” said Choi.

“I think I’m not myself at the moment. I am living the happiest moments of my life right now. I’m unraveling all the content and know-how I’ve accumulated over the years of my career in this business through the show, and it will be exhilarating to finally see it on stage,” he added.

“Nori” premiers Tuesday at the Arco Performing Arts Center in Daehangno, central Seoul. The show will run until Aug. 21. In November, SPAC will visit New York for the first time to stage “Nori” at the Skirball Center for the Performing Arts, a 850-seat theater owned by New York University.

According to Choi, about 30 members of SPAC including himself, made great efforts to learn new instruments and dances they’ve never seen or heard of. For nine months, the members and Choi spent day and night learning how to play musical instruments like the steel drum, from Trinidad and Tobago; Spain’s flamenco guitar; the didgeridoo; as well as an Indonesian mask dance called Topeng.

To here more about the upcoming show, Joongang Sunday sat down with Choi for an interview. Here are some edited excerpts.

To celebrate the 30th anniversary of its establishment, the Seoul Performing Arts Company will be staging a show titled “Nori,” which showcases a diverse range of musical instruments from different countries including (from left to right) an Indonesian gamelan ensemble; didgeridoos, a wind instrument developed by indigenous Australians; and a balafon, or wooden xylophone-like instrument from West Africa. [SEOUL PERFORMING ARTS COMPANY]

Q. You are known as a percussion master in Korea. How did you end up as an artistic director at SPAC, as well as writing and directing this performance?

A. Many people were wondering how a pungmul performer became an artistic director when I just got appointed last June. But I actually worked with SPAC 23 years ago for about three years as an assistant director and worked on musicals. I’ve also worked on diverse genres of performing arts in the many festivals that I’ve directed.

The new show seems like it’s an unusual mix of non-verbal performance and drama. Why did you go for such a style?

All the members of SPAC double as actors and musicians. They are as great as any stage actor or full-time musician out there. As a result, I thought such a style is something that only SPAC could do really well. So we worked really hard to learn these new instruments, songs and dances so that we don’t look like we are beginners. These days, musicals are the popular performing arts genre in Korea. But in my opinion, we ought to be making live music on stage, like our ancestors did with madanggeuk (a type of traditional Korean performance that is staged outdoors). For Korea to really succeed with musicals, I think we should bring musical instruments up onto the stage and make it live. I think that’s the competitiveness we have, and it’ll be recognized when taking the works abroad as well. Because of these capabilities and opportunities, I’ve decided to mix non-verbal performances like dance and music with drama.

I’ve heard that the show includes personal stories from you and members of the company. Is that right?

I’ve included my personal story of establishing the World Percussion Research Center at Chung-Ang University, as well as experiences of living in a foreign land when I studied abroad with my students at the research center. There’s also a sad story of mine when I couldn’t immediately go to the hospital’s mortuary after hearing my mother had just passed away. Instead, I was jumping up and down, playing on my drums as there was a performance I had to stage for an event at the Blue House. I believe it’s the fate of a performer. I tried to include the joy, anger, sorrow and pleasure I’ve experienced living as one.

The show is subtitled “Global Fantastic.” Why?

We live in a globalized world right now, but to see a country’s traditional performance, one has to actually visit that country. For this show, however, our audiences will be able to tour across five different countries in their seats. I wanted people to understand the diversity of music and dance in different countries through nori. Moreover, like the title “Nori,” my ultimate goal is to make our audiences really have fun.

Why did you name the show “Nori?”

I believe everyone’s life should involve playing. Our ancestors enjoyed nori even when they were doing really tough physical work. For example, while they were planting rice, they would sing a tune and move their bodies to the beat. We are the people who were wise enough to sublimate labor into play, but I guess people today have forgotten just how much nori means to us. In fact, you don’t know nori until you really play one. That’s why I hope we can really “play” with the audience members to the show.

Different instruments from a diverse range of countries will be played on stage. Were you and the members amazed by any of the unfamiliar instruments? And is there going to be a Korean instrument as well?

Yes. There are going to be dozens of different instruments but it will begin with a daego, which is a kind of large buk (drum). The show begins as a man beats a daego on stage. We were overwhelmed by the many different instrument used in the large-scale gamelan ensemble from Bali. There are different sizes of marimba-like metal percussion instruments, and when players beat them using differently shaped tools, a mystical yet harmonious sound gets created. There’s also Trinidad and Tobago’s steel drum. Although it’s a drum, it can play some of the scales. I fell in love with this instrument when I first saw it at the World Drum Festival at the Vancouver Expo in 1987. It basically led to my interest and research into different percussion instruments from around the world. When I was at the festival, I heard an unfamiliar sound of a percussion instrument during an orchestra concert so I followed the sound and it was a steel drum. I was so amazed by how such beautiful sounds could be produced by a drum. Since then, I’ve been purchasing percussion instruments from different countries and inviting musicians who can play them to teach me as well.

This genre of percussion music doesn’t need any kind of explanation. You just play the instrument and let the listeners including yourself respond with their body. Once you hear the beat, you want to move your body and that’s the universal language of percussion music. What I’m trying to do is graft together the most primitive sounds that come from percussion instruments and express them to a global audience. While I was doing samulnori (a kind of Korean traditional percussion performance), I got to experience a lot of percussion instruments from different countries, and learning the instruments together with my students became a great asset for me. In fact, my students were the ones who taught the members how to play the new instruments for this show.

It must have been challenging to weave together all different sounds from across the world while still producing something that’s distinctly Korean. How did it go?

The story develops as members of a performing arts group all go abroad to learn about music in each of the different countries and come back to create a work that can represent Korea. The final 30 minutes of the show is about that traditional nori of Korea that I keep talking about. Korean rhythms will be the base and the members will show how they interpret what they’ve seen in different countries in their own Korean way. The members will also interact with the audience and teach them simple songs to sing along as well as dance moves. We will be performing the show in New York in November as well. SPAC has been invited overseas for dance performances as part of special events several times during the last 30 years but it’s the company’s first time going overseas to perform as part of a venue’s official season.