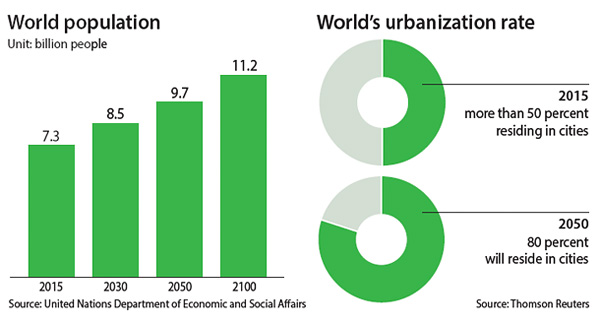 With the world’s population expected to exceed 9 billion by 2050, a critical question lies ahead: Who will feed them all?

The current population of 7.3 billion is expected to swell to 8.5 billion by 2030 and 9.7 billion by 2050, according to a United Nations report released last year.

An aging population and rapid urbanization that will result in a steeper drop in the number of traditional farmers and resources for farming will create challenges.

Among many attempts to solve the issue, industrial moves can be summed up in two big trends: applying technology to existing farms to produce more, and relocating farms into cities.

In 2008, Monsanto, the world’s largest agriculture company, made a commitment to sustainable agriculture, with pledges to produce more, conserve more and improve farmers’ lives by 2030. The company is best known for its biotechnology represented by pest-resistant corn, soybeans and cotton seeds and vegetable seeds that are bred to deliver nutrients.

Its other innovations to double crop yields by 2030 include improved farm-management solutions. Monsanto’s satellite-driven precision farming system gives farmers information on their planting and fertilizing down to the square meter, the company says.

While the company offers solutions for mass farm production, start-ups are cropping up that target urban farming and city dwellers.

Click and Grow, based in Estonia and San Francisco, offers a smart pot inspired by the technology that NASA uses to grow plants. It provides smart soil, which releases nutrients in sync with a plant’s life cycle and keeps the soil’s pH balanced. The pot also has an adjustable light emitting diode lamp that spurs plant growth. Sensors embedded in the pot monitor garden vitals, checking plants’ needs for light, water and nutrients.

“I’m on a mission to change the food industry… to make fresh food affordable and accessible for everyone,” says Click and Grow founder Mattias Lepp. Start-up Gotham Greens set up a 15,000-square-foot greenhouse on its Brooklyn, New York, rooftop in 2011. The start-up produces 100,000 pounds of fresh leafy greens on the roof annually.

It enhanced the sustainability of the greenhouse by offsetting the electrical demands of the farm with solar panels producing 60 kilowatts of power and also employing passive ventilation systems and thermal curtains to reduce electrical and heating demands. The start-up operates four such farms, with the second greenhouse finding a home on the rooftop of a Whole Foods Market in Brooklyn in 2014. Its retail and delivery process of the product is simpler as its production site is right where customers consume the greens.

In Korea, agricultural innovation has been mostly centered on creating “smart farms” where remote monitoring and controlling of farming conditions is possible through technology. Ceiling, curtains, ventilators, sprinklers and more can be controlled through smart technology, and the technology directly notifies the farmer of any atmospheric changes.

SK Telecom has tested smart farm technology on 100 farms in Sejong City since 2014. According to research from Seoul National University on 10 strawberry farms, productivity was enhanced 22.7 percent while labor input was cut 38.8 percent in just a year. Currently SKT is operating Dure Farm as 8264 square meter (2.04 acre) training ground for smart technology.

“The Ministry of Agriculture, Food and Rural Affairs has announced its focus this year on expanding smart farm environment and we will work together by actively cooperating with farmers and setting up IoT infrastructure,” SKT said in a statement.

LG Group’s LG CNS is the latest to attempt to establish a smart farm. The IT unit plans to invest 380 billion won ($343 million) to create the Smart Biopark on 76 hectares in Saemangeum, North Jeolla, though its plan is faced with protests from farmers.