Olympic football squad settles with a 3-3 tie with Germany

Olympic football squad settles with a 3-3 tie with Germany 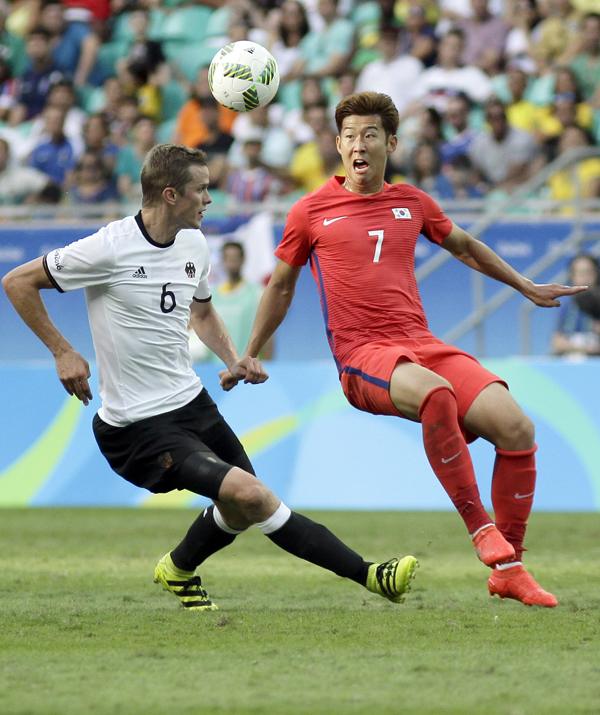 Son Heung-min, right, battles for the ball during the preliminary football match against Germany on Sunday in Salvador, Brazil. Korea came out with a 3-3 draw with Germany.[AP/NEWSIS]

A victory was just within reach, but as the ball rattled the right corner of Korea’s net during injury time, it became apparent that the Korean men’s football team would have to settle with a 3-3 draw against Germany on Sunday during the Olympic football preliminary match in Salvador, Brazil.

Coming out of an 8-0 win over Fiji two day earlier, Shin Tae-yong, the manager, as well as the squad, looked confident to advance to the knockout stage early by topping the European team.

Their confidence delivered, with Hwang Hee-chan scoring the opener in the 25th minute. During the corner kick set-play, Hwang took the ball near the end line and scored.

But Germany, whose senior team won the last World Cup, was not going to let Korea get away with an easy win. Eight minutes after Hwang’s goal, Germany scored an equaliser, only to take the lead in the 55th minute with yet another goal.

Then Son Heung-min, a wild card and the only premier leaguer of the Korean team, came to the rescue. In a pinch surrounded by three defenders, Son took possession of the ball on the German side of the pitch and shook off the defenders before drilling home a shot with his left foot to even up the score. Suk Hyun-jun, another wild card who was substituted in at the 74-minute mark, netted Korea’s third and final goal of the day in the 86th minute with a solid shot off his right foot.

Korea only had three minutes to go after regulations, and all it had to do was to hold off the Germans from getting near its goal. But the Germans were tough opponents. A minute to go in the added time, Germany went and equalised the match with a free kick just outside of Korea’s penalty box, crushing Korea’s hope to secure an early spot in the quarterfinals.