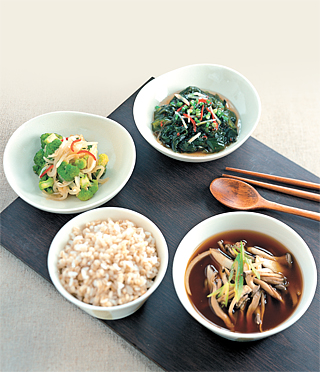 In a decision that would’ve once been considered a sacrilege, Choi Yu-jeong, 42, recently stopped making banchan for her family.

The side dishes are a fixture of Korean tables, but for the working mother of two boys, they had represented an increasingly impossible task over the last 12 years.

Instead, she signed up for a banchan delivery service near her home in Sinsa-dong, Eunpyeong District, northern Seoul.

Four different side dishes of her choice are delivered to her apartment twice a week. For the cost of 120,000 won ($106) per month, Choi said she is not only freed from the “time-consuming labor of making banchan,” but also relieved from the guilt she felt always serving fried eggs and gim, or dried and salted seaweed, as side dishes when she didn’t have time to make something special.

“I have to meet deadlines up to three times a month but I still need to help the boys with things like homework. I also do the house chores such as the laundry and vacuuming. It’s quite hard to prepare new side dishes every other day,” said Choi, who works as a freelance graphic designer for several magazines.

Choi said she initially felt uncomfortable buying banchan because in Korea, cooking is still considered a prime duty of mothers and wives. But that discomfort soon dissipated when she learned how many other women - including full-time housewives - ordered banchan from online and offline stores.

“I had to wait a month to be added to the banchan delivery service because there were so many people who wanted to join. I was relieved to learn I wasn’t the only one.”

The classic Korean meal - a bowl of rice, guk (soup) and assorted banchan including kimchi - is thought to date back to the mid Goryeo Dynasty (918-1392).

Banchan often fascinates foreigners, who are not accustomed to an array of complimentary side dishes coming with an a la carte order.

“I can feel jeong from [the sides],” he added, using the Korean word that roughly translates to “warm human affection.”

Another fan is Aurelien Loubert, a French student who studies in Seoul and is a regular guest on the popular JTBC talk show “Non Summit.”

“The most beautiful aspect of Korean culture can be found in restaurants, which give you assorted banchan,” he said during a recent episode.

But while banchan may be culturally significant, the recipes - typically passed down from mother to daughter - are often time consuming and complicated. For a generation of women who are increasingly holding down a job while also helping to raise kids and take care of the house, this makes them impractical, and a host of both big-name and mom-and-pop brands are stepping up to cash in.

From left: Stir-fried rice with shrimp, budae jjigae (spam stew) and beef jangjorim (beef boiled in soy sauce) are three of E-Mart’s home meal replacement (HMR) products. The market for the products is rapidly growing thanks to an increasing number of single households. But industry insiders also say the growth of the HMR market is an indicator that banchan (side dish) culture is losing its footing as people no longer have the time to make the numerous, complicated accompaniments. [JOONGANG ILBO]

One such company is Dongwon Home Food, an affiliate of Dongwon Food & Beverage, which produces canned tuna, dairy products and other kinds of processed food.

Dongwon is in the process of taking over The Banchan, an online store, for somewhere between 20 billion and 30 billion won.

The store started out in the corner of a traditional market in Yeongdeungpo District, western Seoul, but has since grown into a gigantic website with a reported 600,000 members. It sells nearly every side dish imaginable, along with different kinds of guk and kimchi, and gets 25,000 visitors each day.

“The company has acquired [The Banchan] because it thinks the home meal replacement market will only get larger,” said Kim Il-kyu, who heads the public relations team at Dongwon Group.

The simplest category is “ready-to-eat,” which includes dishes like stir-fried potatoes or seasoned vegetables that can be eaten from the package. There’s also “ready-to-cook,” which are more complicated meat or fish dishes that come with a broth, condiments and the main ingredients, as well as “ready-to-heat,” which refers to pre-cooked foods like porridges and stews that just need to be warmed.

Other players include E-Mart, the country’s biggest discount store and operator of the HMR brand Peacock, and CJ Cheiljedang, a leading food manufacturer that recently decided to produce more HMR products.

According to the Agro-Fisheries & Food Trade Corporation, the HMR market in 2009 was worth 710 billion won, but the market is estimated to reach 2.3 trillion won by the end of this year.

Industry insiders say the whopping growth in the HMR market is a sign that the culture of homemade banchan is fading out.

“With an increasing number of single households, people often dine out or eat simple meals. The culture of many homemade banchan is naturally disappearing,” said Prof. Moon Jung-hun, who teaches in the agricultural economics and rural development departments at Seoul National University.

“The table with seven or five side dishes will become obsolete in the near future and you may find them only in history textbooks,” he added, referring to the number of sides traditionally eaten by the upper class during the Joseon Dynasty (1392-1910).

As the head of his university’s Food Biz Lab, which analyzes how Koreans consume food and spend their leisure time, he said he’d also seen trends here reflected in other parts of the world.

“The pre-cooked and simple meal market is rapidly increasing around the world,” he said.

But things may be further along in Korea. According to the “Asia Pacific Food Forward Trends Report II,” released by the public relations agency Weber Shandwick last year, Koreans surveyed cooked the least compared to people from other countries.

Thirty-four percent of Koreans said they cook every day, compared to 76 percent of Australians.

According to food critic Hwang, the rapid social changes seen in the past few decades are behind the rise of the prepared banchan industry.

“Back when Korea was an agrarian society, women had time to cook all day long, but since the 1960s, women have begun working and earning money. Korean food traditionally has many parts - the rice, guk and banchan - and so it naturally takes hours to prepare. Women used to be able to do it, but they can’t anymore.

“To put it simply, it is hard to create a traditional table in modern Korean society. Instead, we have to think about how we can bring changes to dining tables. It’s okay if every meal doesn’t include rice, guk and banchan. We can replace some with simpler, one-dish meals.”

Meanwhile, Yun Jeong-ho, who runs The Banchan, said he has been in the HMR business for the past decade and anticipates continued growth.

“A majority of women feel guilty about ordering banchan from websites like mine, but eventually they do it anyway because they know the process of preparing and making banchan requires intensive labor.

“They also know that they can’t afford to make banchan for their families given the time it takes. In that sense, this market is bound to grow bigger than now.”

Still, just because fewer people are making the sides at home doesn’t mean that the taste for them is disappearing.

“Many restaurants which offer jipbap [home cooking] have sprung up one after another in recent years,” said Hwang. “The trend is telling us that home-style meals have become a luxury busy people want, but can’t afford to make themselves.”