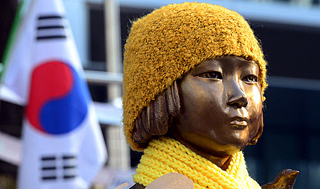 Let’s say you pressured someone to not do something. If he feels his freedom of choice was taken away, he will actually try harder to do it. This is the “boomerang effect” suggested by American psychologist Jack Brehm.

And it is a great term to describe the Shinzo Abe administration’s attitude toward the bronze statue of a girl symbolizing “comfort women” outside the Japanese Embassy in Korea. Abe’s associates are making demands repeatedly to the Korean government that the statue be relocated. Furthermore, a close aide of Abe went to Washington in January and asked U.S. officials to stop similar statues from being built in the United States.

The Abe administration appeared to believe that relocating the statue and stopping construction of more statues can be done through Seoul and Washington. That is a great delusion. The statues in Korea were built by civic groups. The government has no way to meet Japan’s demand, other than making appeals, because of public sentiment on the issue.

In the United States, a federal judge dismissed yet another lawsuit on Aug. 4 filed against Glendale, California that sought the removal of a statue honoring comfort women. Furthermore, the court also granted the city’s request to bar a strategic lawsuit against public participation (SLAPP). A SLAPP is a lawsuit intended to intimidate and silence an individual or a group by burdening them with the cost of a legal defense until they abandon their opposition. Unless the Supreme Court reverses the ruling, no one can challenge the construction of a comfort woman statue with a lawsuit. If the Abe administration tries to stop it, more statues will likely be built. On Aug. 6, a statue was built in Sydney, Australia, the third statue outside Korea. Furthermore, nine new statues will be completed in Korea this month, and 20 more are planned to be erected.

The Holocaust and the Armenian Genocide are the two worst crimes against humanity in the 20th century. There are 65 memorials in 20 countries to remember the genocide of 7 million Jews by Nazi Germany. There are also 33 memorials in 15 countries to remember the 2 million Armenians killed by the Ottoman Empire in the early 20th century. Most of them were built by overseas Jews and Armenians. And the power of 7 million Koreans living overseas is as strong as theirs.

For the Abe administration to stop the spread of the comfort woman statues, there is only one solution. It must apologize and apologize repeatedly until the Koreans say that it is enough. Otherwise, tens of statues will be built rapidly around the world to humiliate Japan. The foreign ministries of Korea and Japan will hold director-level talks today in Seoul. A consensus on this issue should be reached at the meeting.