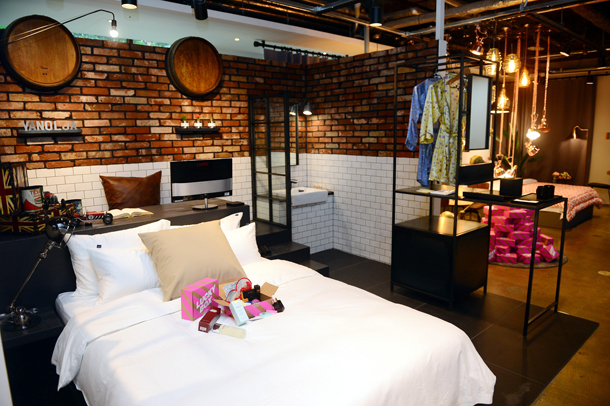 A model of a motel room offered by Yanolja, on the second floor of company headquarters in Gangnam District. The company monitors interior designs and services of its franchise locations in an effort to polish the image of motels. [NEWSIS]

Motels have long been stigmatized as places for secret affairs or having low-quality accommodations. However, recent mobile apps for reservations such as Yanolja and Yeogi-Eoddae are working to rebrand the images of the nation’s motels to attract new visitors and new investors.

Yanolja, the first entry in the motel technology sector in 2005, not only has an app but it has its own franchise. The company has been focusing on reshaping motels’ reputations by renovating the interiors of rooms under its brand and removing adult products frequently offered to customers.

“Without bold moves, it will be hard for motels to shake off the image of being love hotels,” said Lee Su-jin, CEO and founder of Yanolja. “If our business model could show motel operators that the business could be profitable even without being positioned as ‘love hotels’, changes in the overall industry will follow through.”

Yanolja started its franchise business in 2011 with nine sites and has grown to 100 this month. Sales have jumped 200 percent while operating profit has increased 28 percent, according to company data.

The hotel franchises are implementing drastic measures to polish their image. Not only have they removed adult products from rooms but they’re cutting X-rated channels from the television offerings and removing fences that were used to block views of the parking lots.

“These motels were mostly used by couples or people in affairs but we plan to expand our customer base to those on business trips, families and even foreign tourists,” Lee said.

The franchises are branded under the Hotelyaja, Yam and HAvenue names with different target customers. Yam motels offer more affordable and practical rooms while HAvenue provides rooms and services similar to a hotel for tourists. The company opened Hotelyaja, its first franchise, in 2011.

To maintain and upgrade the quality of the rooms, it regularly sends supervisors to monitor franchise operations. In February, it also opened a research center and a model at its company headquarters in Gangnam where visitors can see concept designs of motel rooms. The company plans to work on room quality and designs through it research and development center.

Reservation app Yeogi-Eoddae, operated by WithInnovation, entered the market in April 2014. With 5,600 affiliated hotels, it has successfully dominated the market by adding more tech features and services to its app.

Yeogi-Eoddae currently owns 55.5 percent of the market in monthly active users while Yanolja maintains the rest of the market pie, according to global market intelligence firm Nielsen Korea.

The company has grown - and attracted investors - by improving its overall customer service.

In January, Yeogi-Eoddae implemented a lowest-price guarantee project, meaning customers can reserve rooms at the lowest possible price through its app. If customers spot a cheaper deal through other services, they’re granted five times the price difference in cash.

In March, the company launched a “real review” system, which enables only actual users of Yeogi-Eoddae affiliated motels to leave reviews online.

“These services enhanced customers’ credibility on our services by providing realistic and accurate information to customers,” a company spokesperson said.

In the last month, Yeogi-Eoddae added 360-degree virtual reality views of the motel rooms, so that customers can use smartphones to select their rooms based on realistic data.

“Accommodation app users usually depend on pictures that are often not realistic and this service will aid customers to choose rooms based on credible information,” the spokesperson said.

Yeogi-Eoddae’s revenue by room reservations, excluding advertisements and other sources of revenue, more than doubled from 6.1 billion won ($5.5 million) in December through January to 14.5 billion won in June through July.

The company aims to build on VR, Internet of Things and artificial intelligence to improve customer service. Investment firm JKL Partners injected 20 billion won into the company last month. Yanolja is developing IoT platforms so customers can measure temperature, lighting and other room information through smartphones and order concierge services through the app. SL Investment and Partners Investment gave the company 15 billion won to build on its new platforms.