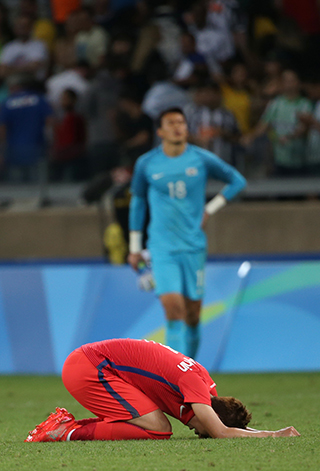 Son Heung-min of Korea is crushed after an unexpected loss to Honduras during quarterfinals at this year's Summer Games in Rio de Janeiro, Brazil, on Saturday. [AP/NEWSIS]

Manager Shin Tae-yong and midfielder Son Heung-min’s dream to stand on the Olympic podium came crashing down on Saturday when the Korean Olympic football team fell out of the tournament with a 0-1 loss to Honduras.

During the quarterfinals match against Honduras at Mineirao in Belo Horizonte, Brazil, Korea outperformed the Central American squad in every aspect, including ball possession and shots. Despite this, the Korean squad was unable to net the ball against Honduras, whose sole goal came with a counterattack in the 59th minute of the match.

Throughout the 90-minute game, the Korean side over-possessed Honduras by 64 percent and had a number of goal-scoring opportunities. One of the highlights of the game came in the 38th minute, when Son drilled a free kick from the midfield just outside the box. Although it didn’t lead to a goal, it was enough to demonstrate that the Korean team had the upper hand in terms of skill and ability.

Such plays occurred several times throughout the match, as demonstrated by the number of shots taken by Korea, which had seven different chances to score. But the Honduras goalie Luis Lopez singlehandedly managed to reject every Korean shot, including one in the 55th minute when Son took fired away at the top of the box and Lopez got the ball with the tip of his fingers.

After Honduras scored their lone goal, the Central American team started to kill time. Honduras players fell to the ground repeatedly, complaining of pain, and laid on the ground for minutes at a time. Lopez even received a yellow card for wasting time during a goal kick.

Frustrated, the Korean players continued to penetrate into the Honduran side of the pitch, pile-driving shots from the left and the right. But with the clock ticking, they were unable to get past Lopez and eventually the match came to an end, leaving Shin and the squad utterly dumbfounded as their shot at an Olympic medal was unexpectedly snuffed out.