3 million to be cheated out of minimum wage

3 million to be cheated out of minimum wage 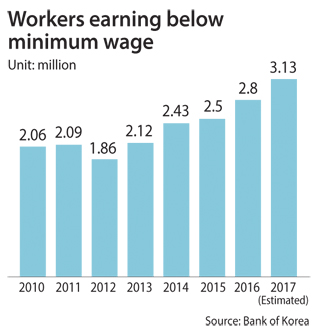 Almost one out of six workers will earn below minimum wage next year if current trend continues. Rises in the minimum wage merely increase the number of workers who get paid less, the government said.

The Bank of Korea (BOK) said Tuesday that the number of workers paid less than minimum wage will reach 3.13 million in 2017, up 11.8 percent from the current 2.8 million.

The data is based on a report the BOK’s research bureau sent to its monetary policy committee last week. The central bank cited the relatively rapid increase in the minimum wage as the reason.

The government announced a new hourly minimum wage of 6,470 won ($5.90) for next year, up 7.3 percent from this year’s 6,030 won. Opposition parties and labor unions maintain that the 2017 minimum wage should have been raised even higher.

“After the global financial recession, the minimum wage level increased at a rapid pace,” the report said.

The report also indicated that policing of employers and punishment for those not paying minimum wage is weak.

The Ministry of Employment and Labor is responsible for regulating entities paying less than minimum wage. The number of violations reported by the ministry has been on decline despite an increase in the number of workers being underpaid.

“The number of people who earn below the minimum wage increases but the detected cases are falling,” the report stated, “That translates into less incentives [for employers] to comply with the rules.”

The People’s Solidarity for Participatory Democracy, a left-wing civic group, called on the Labor Ministry earlier this month to strengthen its policing, saying that the reported cases account for less than 1 percent of workers earning less than minimum wage.

By industry, the food and hospitality sector likely has the highest proportion of underpaid workers.

The minimum wage was 81.8 percent of the average hourly wage in that industry. By comparison, that figure is only 74 percent in agriculture and fisheries and 70 percent in services.

Adding urgency to the issue, Korea’s proportion of minimum wage workers is far higher than other advanced countries.

The U.S. has a comparable number of underpaid workers at 3.6 million, according to U.S. Bureau of Labor Statistics, but the U.S. job market is about ten times larger than Korea’s.