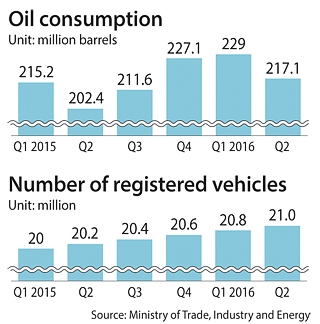 Korea’s crude oil imports and consumption rose significantly in the second quarter compared to last year, the Ministry of Trade, Industry and Energy said Wednesday, a result of sanctions on Iran being lifted earlier this year and falling oil prices.

Korea imported 266 million barrels of crude oil in the second quarter, up 4.5 percent year on year. Oil imported from Iran rose 123.3 percent to 25.4 million barrels during the same period.

“Imports and exports of crude oil rose in the second half compared to the previous year after sanctions on Iran were lifted and demand in general rose globally with the fall in crude prices,” said Park Jae-young, a director at the ministry.

Although the number of barrels exported rose, the amount made from the exports fell due lower prices. Korea exported $6.22 billion worth of crude this year, a 23.6 percent drop from last year’s $8.14 billion.

Household consumption including for heating and cooking rose 3.2 percent.

By type, gasoline and diesel consumption rose 6.7 percent, and the ministry cited the growing number of vehicles in the country as one of the main reasons for the increased use. The number of cars registered in Korea rose 4.2 percent from 20.2 million in the second quarter of last year to 21 million this year.

In fact, the ministry said diesel consumption in May alone reached an all-time high of 14.3 million barrels.