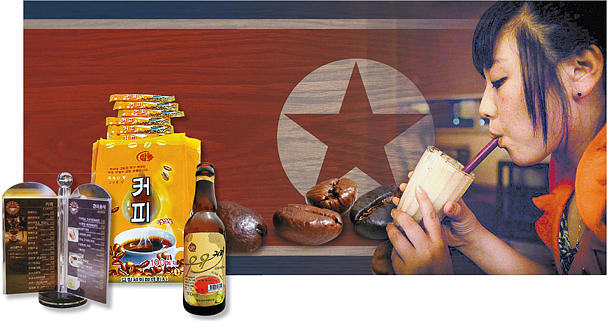 Instant coffee may have once symbolized American imperialism, but these days, it’s winning hearts in North Korea.

Although many in the country refused the drink at first because of its bitter taste, they gradually fell in love with its ability to help them stay alert throughout a day. In fact, sticks of South Korean instant coffee became one of the most popular items handed out to the 50,000 North Korean laborers who worked at the now-closed Kaesung Industrial Complex, north of the inter-Korean border.

Despite the bitterness, the energizing instant coffee sticks were also very sweet and convenient for laborers to drink - just add hot water.

Amid such popularity, North Korea came up with its own instant coffee brand named Sambok. It went on sale in early part of this year in major North Korean cities such as Kaesung and Sinuiju.

The brand was introduced to South Koreans when Prof. Lee Woo-young at the University of North Korean Studies in Jongno District, central Seoul, posted a picture of an instant coffee stick on his Facebook in late May. 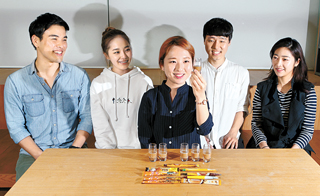 The yellow packaging and core ingredients, including dried coffee, sugar and creamer, were nearly identical to popular South Korean instant coffee brands, making some wonder if it was just one of these familiar products with the logo scrubbed off. Each package weighs 12 grams, of which 13.3 percent is dried coffee, which is also highly similar to South Korean mixes.

In order to compare the actual tastes of instant coffees from the South and North, the JoongAng Ilbo, an affiliate of the Korea JoongAng Daily, conducted a blind taste test with a group of six university students who are self-professed coffee lovers.

Further, to check the quality of North Korean coffee, Sambok sticks were sent over to the R&D team at Dongsuh Foods, which produces the popular Maxim brand, to be analyzed.

The testing required between 20 and 30 sticks of Sambok. Although it was almost impossible to get that quantity from the North, the reporter was finally able to obtain them from an ethnic Korean living overseas who visited Pyongyang. Due to the complex process, it took two months for this reporter to cover the story.

During the taste test, the six students tried six different coffee brands. Five were from South Korea, while the last was Sambok. The five domestic brands were Maxim, French Cafe from Namyang, Nescafe from Lotte-Nestle and the private coffee brands from Korea’s major discount stores Emart and Homeplus.

The students evaluated each instant coffee based on three categories: fragrance, sweetness and drinkability. The highest score for each category was five, and Sambok and Maxim tied for third with 10.6 points out of 15.

“The North’s product was closest to how a person would imagine the taste of an ordinary instant coffee to be,” said Im Ha-neul, 25. Seok Hun-cheol, 29, was highly impressed by Sambok’s coffee, saying, “It tastes much better than I expected.”

On the other hand, Lee Na-yeong, 22, didn’t love how the mix made her feel.

“I think it will be difficult to drink frequently, since it feels like it contains too much caffeine,” she said.

Regarding its quality, the team at Dongsuh Foods concluded that “Sambok coffee is subpar in terms of its [production] technique.” It said this was because the coffee is produced by spray drying, which is cheap but uses high temperatures that affect taste and fragrance.

The five South Korean products, on the other hand, are made through freeze-drying, which is more costly but preserves the smell and taste better.

It was only in early 2012, when the Kim Jong-un regime began, that middle and upper middle class people in Pyongyang became interested in coffee at all.

Kim, who studied in Switzerland during his youth, often enjoyed coffee with his wife Ri Sol-ju at a cafe in Pyongyang in 2012, and the scene was broadcast by the North’s state-run media outlets.

Since then, many western-style coffee shops offering various coffee drinks like espresso, cappuccino and cafe mocha have begun opening in the North.

Most of the drinks range from 400 won ($0.36) and 900 won. This means that only wealthy people can enjoy them, considering that the average monthly salary in the North is 3,000 won.

The coffees sold to foreigners in Sunan International Airport in Pyongyang are even more costly, leading to a saying among the city’s visitors that the “coffee sold at the airport is the most expensive in Asia.”

The popularity of coffee in Pyongyang was highlighted when Singaporean photographer Aram Pan posted YouTube videos showing diverse coffees, dishes and desserts being sold in the North. According to the video, creamy Vienna coffees and flavored lattes are available at one hotel in Pyongyang.

But traditional coffee-shop drinks and instant mixes aren’t the only new coffee products showing up in the North recently.

“This change [in the North] implies its desperate attempt to prevent ideas from South Korea from flowing into the North,” said Prof. Kang Dong-wan who teaches political science at Dong-a University.

“The fact that the North started manufacturing food such as coffee mix is highly notable,” because it indicates Kim Jong-un’s fear of South Korean products gaining hold and influencing the general population, he added.

Back in the day, java mistaken for booze or burnt rice


“Why would you drink water made from burnt rice?”

These were the words spoken by an executive from North Korea’s Workers’ Party after taking his first sip of black coffee. The executive misunderstood it to be water that had been used to cook nurungji, a dish made from the scorched rice left at the bottom of the pot after cooking.

“This surprising event happened in the mid ’90s when I brought out a cup of coffee to serve the executive,” said a 48-year-old North Korean surnamed Kim who defected in 2009.

Kim was born in Japan, and when he first entered North Korea in 1979, coffee was not prevalent. People in the upper class began enjoying coffee from Vietnam or Russia starting in the mid 1980s. However, they mostly drank black coffee because of shortages of cream and sugar.

The popularity of creamy coffee drinks spread from visitors to Japan, according to Kim. Until foreign coffees officially flowed in to the North in the late ’90s, Japanese coffee sent back by North Koreans living abroad was the most popular.

There are many stories floating around about North Koreans’ reactions when they first tasted coffee. According to one, a North Korean thought coffee was a new type of alcoholic beverage because of its bitterness.