Koreans buy meals that are instant and tasty

Koreans buy meals that are instant and tasty 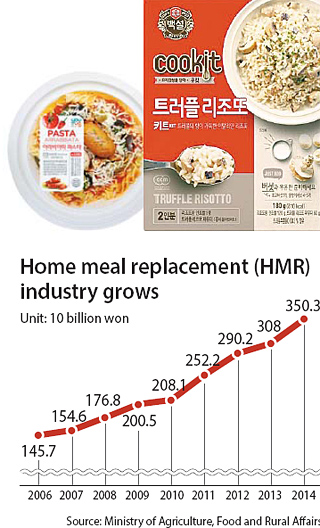 Bachelors, husbands with wives out of town, and the generally lazy have a far greater variety of instant meals - like teriyaki chicken and even truffle risotto.

With the ever-increasing number of single households, which now account for 27.1 percent of total households in Korea, and consumers becoming more hungry for easy but tasty meals, local food manufacturers are launching a new generation of instant food products that are affordable, convenient but also high in quality.

The most unappetizing thing about them is their industry label: home replacement meals, or HRM.

According to data released by the Ministry of Agriculture, Food and Rural Affairs, Korea’s HRM market reached 3.5 trillion won ($3.1 billion) in 2014, which is 13.7 percent growth on-year. That growth rate is three times faster than for the food and beverage manufacturing industry as a whole, which expanded by 4.4 percent in 2014. E-Mart’s in-house food and beverage manufacturer Peacock has been the market leader in the HRM industry by launching more than 700 items. Options include kimchijeon (kimchi pancakes), jjajangmyeon (noodles with black bean sauce) and more.

The positive response to their products led them to collaborate with popular local eateries last year, releasing packaged versions of dishes on their menus. That allowed customers in Seoul to have a taste of regional dishes such as loach soup from Namwon and Uijeongbu’s sausage stew.

Local food manufacturers are jumping on the bandwagon.

CJ Cheiljedang, Korea’s leading food manufacturer, recently established a brand called “Cookit” which includes all the supplementary ingredients for a dish in a single box that costs less than 5,000 won.

“We deliberately picked dishes that are kind of familiar to Korean customers but something they may not have dared to cook at home,” said Lee Jung-woo, the brand manager.

“We are going to expand the menu and we are considering Thailand’s Pad Thai (fried noodles) as the next option. It is quite popular in the Korean dining industry but hardly anybody tries to cook it at home.”

The Cupban series, according to CJ Cheiljedang, is targeted at single households looking for simple but decent meals at home. They can be cooked within four minutes in a microwave and can be stocked for nine months at room temperature. Offerings include seaweed soup and beef-bone soup accompanied by rice.

GS25 added oven-baked chicken and spicy tomato pasta to their 16 HRM items. A GS25 spokesperson said a sausage stew that doesn’t need an extra pot because it is already packaged in an aluminum container that can be directly put on the stove was its most popular. “It is the least likely item one expects to find in an instant food category, which I think is why many people bought it.”