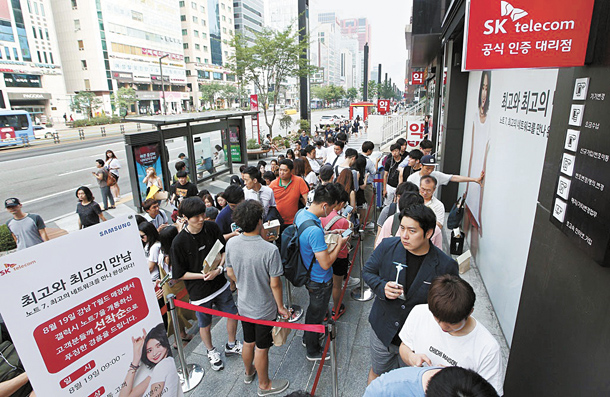 Customers line up in front of the Gangnam branch of SK Telecom, where a launch was held for Samsung Electronics’ latest Galaxy Note 7. The new smartphone dropped on Friday simultaneously in 10 countries worldwide. The first purchaser of the newest gadget at the SKT branch in Gangnam also received a free UHD TV. [NEWSIS]

Samsung Electronics’ newest Galaxy Note 7, which has been in the global limelight since its concept was unveiled this month, was released in 10 countries Friday. The response was as expected: explosive.

“You have to wait about three weeks if you want the blue coral color,” a cellphone vendor said when asked for the newly released Note 7 at a mobile phone shop in the Gangnam District on Friday, D-day for Samsung Electronics’ latest gem.

“We ran out of other colors too right now. You might have to wait a few days,” the vendor said, referring to the gold and silver.

After receiving some 400,000 preorders in Korea since Aug. 6, mobile phone vendors ran out of inventory as soon as shops opened. The number is over double the amount of preorder deals for its last major phone, the Galaxy S7. People lined up in front of main branches of telecom companies - SK Telecom, LG U+ and KT - to receive the phones they reserved for.

“I took the effort to preorder the phone because the new iris-scanning function really caught my attention,” said Cho Seok-ho, a 24-year-old college student, seemingly one of the few people who got his hands on the new gadget on Friday.

“The fact that I don’t have to go through all the identification approval steps when buying something on my mobile phone really played a big role in the purchase decision,” Cho said.

The European market had the highest prices, which according to the online shop, exceeded 1 million won. It sold for 1,064,000 won in Germany and 1,092,000 won in England.

Under the premise of using a 100,000-won phone bill plan, LG U+ provides the highest discount by cutting the original price by 264,000 won. SK Telecom and KT provide a 240,000 won subsidy under the same plan.

Promotional sales were creative and bold, as well.

SK Telecom handed out a UHD TV and a laptop to the first and second purchasers of Galaxy Note 7 in Gangnam. Gear 360, Bluetooth audio and Gear VR were randomly distributed to customers who purchased the phone.

LG U+ held water gun games outside the shop or handed out photo frames. KT gave out coupons for purchasing e-books through the smartphones, emphasizing the Note’s enlarged screen size of 5.7 inches.

Samsung Electronics said it will expand its market to 140 countries.

The response to the smartphone was reflected in the company’s stock price, which hit all-time highs for two days. Stocks reached 1,675,000 won on Friday, up 35,000 won or 2.13 percent, breaking the previous day’s high.