Son all smiles after fourth-place finish

Son all smiles after fourth-place finish 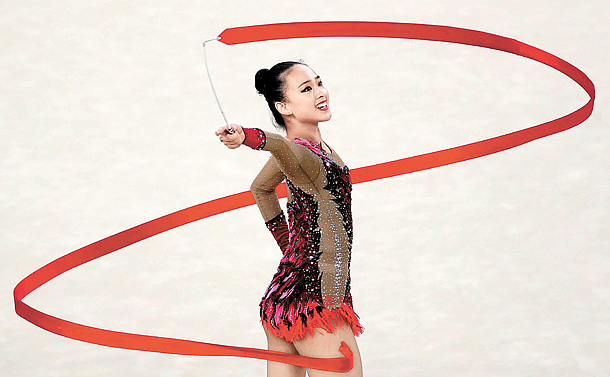 Son Yeon-jae performs her routine during the rhythmic gymnastics individual all-around final on Saturday at the 2016 Summer Olympics in Rio de Janeiro. [NEWSIS]

Son Yeon-jae fell short of becoming the first Asian to medal in rhythmic gymnastics when she finished fourth at this year’s Olympics. But despite missing the podium, Son gave herself full marks for enduring through past struggles and beating the odds to become highest-ranked Asian in the history of the sport.

During the final of the individual all-around in rhythmic gymnastics on Saturday at the Rio Olympic Arena in Rio de Janeiro, Son aggregated 18.216 from hoop, 18.266 from ball, 18.300 from clubs and 18.116 from ribbon for a total of 72.898 in immaculate routines to finish fourth after Ganna Rizatdinova of Ukraine, who scored 73.583 for a bronze. By each apparatus, Son was third in hoop, fourth in ball, third in clubs and fourth in ribbon.

Son placed fifth in hoop during the qualifiers due to several errors during her performance, which momentarily shook her. “I could not have been more nervous,” Son said about the qualification round. The gymnast decided to not think about the mistakes and instead show everything she had prepared for the final, leaving no regrets behind. After the final concluded and without knowing the results, Son suddenly became emotional and couldn’t stop herself from crying.

Son previously made history during the 2012 London Games, where she was the first Asian gymnast to ever reach the Olympics finals in rhythmic gymnastics, finishing fifth. 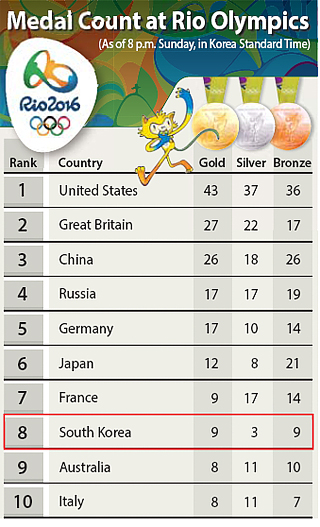 While other Asian gymnasts constantly place at or near the top in artistic gymnastics, it has been almost impossible to imagine an Asian rhythmic gymnast competing side-by-side athletes from Eastern Europe - until Son came along.

“I am satisfied with my performance,” Son said after the final. “If I had to give myself a score, I would give a 100.”

Since her senior debut in 2010, Son has grown to become one of the most popular sports icons in Korea alongside figure skater Kim Yuna and swimmer Park Tae-hwan.

But along with the fame came a substantial amount of criticism.

Even after the 2014 Asian Games in Incheon, during which Son proved there is no match for her in the region by taking gold in the individual all-around, the 22-year-old seriously considered leaving the arena behind. Son has repeatedly shown she’s a world-class gymnast, but many in Korea have still scolded her for being unable to claim gold in international events such as the International Federation of Gymnastics World Cups. Some have even publicly speculated that the reason for Son’s inability to outperform Eastern Europeans is because she has begun to enjoy her newfound status as a national celebrity and neglect herself as a gymnast.

Such remarks left her “psychologically scarred,” and she finally concluded that retiring from gymnastics would be one way to escape the negativity.

Her parents, however, persuaded Son to keep going until the Rio Olympics.

“I did not want to compete in another Olympics,” Son said. “Going to Rio was more difficult than I expected and I thought about quitting a dozen times a day. I hated the idea that I am doing what others expected me to do.”

The mounting psychological pressure left Son nervous, especially during the qualifiers on Friday, but now that everything is over, she said she wanted to give herself a break and commend herself for persevering through it all.

“I have learned so many life lessons by being a gymnast,” Son continued. “For the rest of my life, the lessons will guide me throughout. I did not think this before but now that everything is done, I am glad to have come to Rio.”

For now, the young gymnast has no immediate plans to return to the arena. Instead, she’s opting to return to university next semester and enjoy the rest of her time as a student. Regarding the 2020 Tokyo Olympics, Son’s mother said, “I think she will give it more thought. For now, she would like to spend some time with her family.”