Seongju chief okays Thaad, but not at Seongsan

Seongju chief okays Thaad, but not at Seongsan 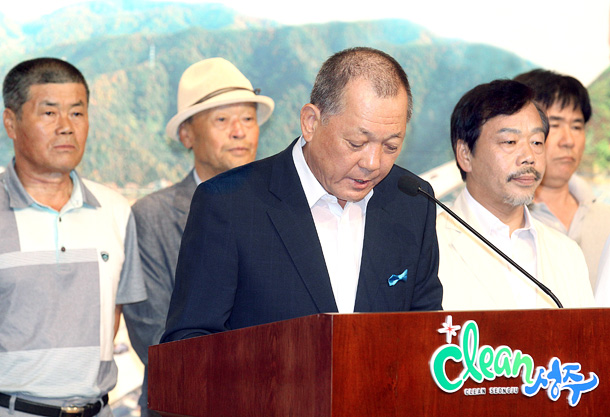 At a press conference on Monday, Kim Hang-gon, head of the Seongju County Office, asks the Ministry of National Defense to suggest an alternate site for deployment of the Terminal High Altitude Area Defense antimissile system. [GONG JEONG-SIK]

The chief of Seongju County in North Gyeongsang gave an okay for the government to place a U.S.-built antiballistic missile system within the county, as had been previously decided, as long as it picks a suitable alternate site.

Kim Hang-gon, head of the Seongju County Office, held a press conference Monday morning and requested the Ministry of National Defense consider another location to deploy the Terminal High Altitude Area Defense (Thaad) battery other than an artillery base in Seongsan-ri, situated near residents.

“We hope the Defense Ministry will decide to pick another suitable location to deploy the Thaad system, excluding the artillery base,” said Kim as he spoke in front of the county’s plaza.

Some 50 residents blockaded the county head’s office to oppose the deployment of the Thaad in the county, delaying Kim’s announcement by half an hour. 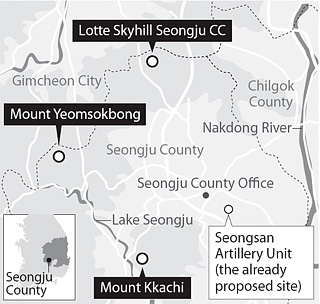 But the county head essentially has given an official okay to place the Thaad system at an alternate site in Seongju, following weeks of vehement protests by residents against the deployment of a battery in their backyards.

The previous day, a committee representing local opposition to the deployment of the Thaad system in Seongju reached a decision that they will accept the placement of the battery in the county, as long as the system’s powerful electromagnetic waves will not affect local residents.

The decision on Sunday was reached with 23 in support, one in opposition and nine abstentions out of the 33-member committee. Previously, the committee said it opposed the deployment anywhere in the county.

But now there is another pinch, as the government has to deliberate over another site to place the Thaad battery other than the Korean military’s artillery base in Seongsan-ri in Seongju County, situated about 1.5 kilometers (almost one mile) from Seongsan-eup, which has about 14,000 residents.

The Lotte Skyhill golf course in the county’s northern Chojeon-myeon has been named as a possible alternate site. The Lotte Skyhill Seongju Country Club is situated at an altitude of 680 meters (2234 feet) above sea level, which is over 300 meters higher than Seongsan-ri. The plot of land spans 1.78 million square meters (440 acres), which is an area 16 times larger than the Seongsan artillery base.

The country club is located around 20 minutes by car from the Seongju County office, and the golf course is located remotely in the mountains. The Ministry of National Defense said on Monday it is in the process of evaluating alternate sites in close cooperation with the county.

“Based on Seongju County residents’ wishes, we are reviewing feasible alternate sites within Seongju County,” a defense official told reporters, adding the Korea-U.S. joint task force will evaluate six criteria, including operational capability, flight safety, cost and the time it will take to deploy the system to the location.

But selecting Lotte Skyhill may require further discussion with the nearby city of Gimcheon. And the cost of acquiring the golf course can be over 70 times more expensive than the artillery base, costing up to 5.4 billion won.

Seongju residents are saying that choosing an alternate location for the Thaad battery is the “realistic” decision.

“As we have voiced our protest against Thaad for over a month, I believe the Defense Ministry will place Thaad in a location that will not harm people,” said one young housewife who resides in Seongju-eup. “It seems as if we have found a realistic decision at the right time.”

A middle-aged man who lives in Seongsan-ri said, “Since it will come anyway, it is right to hold hands with the government when they are reaching out.”

But residents of Gimcheon, which is only a few kilometers from the Lotte golf course, are vehemently opposing the deployment of Thaad near their city, echoing the heated protests that Seongju County residents made last month.

Those who live in areas nearest to the golf course such as Nongso-myeon and Nam-myeon have formed a committee opposing the deployment of Thaad at Lotte Skyhill. From Monday evening, a candlelight vigil will be held in front of the Nongso-myeon’s town office.

“Don’t they say even bees can’t survive within 5.5 kilometers of Thaad?” said We Hyeon-bok, the interim head of Nongso-myeon. “I am worried about the health risks and the price of our plums and grapes plummeting.”

Gimcheon’s city council also expressed its opposition through a statement that day, which declared that, “The Defense Ministry needs to expedite its review of an alternate location for the deployment of the Thaad system, which is encouraging strife between regions.”

It continued, “We will continue to fight to protect the livelihood and property rights of the 140,000 residents of Gimcheon.”