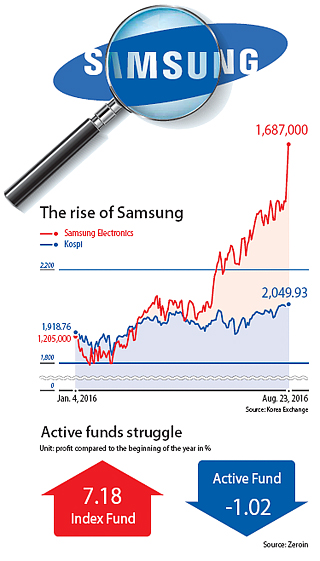 Samsung Electronics’ bullish rally recently has positively influenced the Kospi. But as Samsung Electronics shares and Seoul’s main bourse rise, managers in charge of active funds with relatively low investments in the Korean smartphone manufacturer have seen their profit fall.

After hitting a record high for the first time in more than three and a half years on Thursday, Samsung again broke records on Friday and again on Tuesday, closing at 1,687,000 won ($1509) after taking a breather on Monday.

Samsung shares have risen 40 percent since the beginning of the year largely due to aggressive purchases by foreign and institutional investors.

This helped raise the benchmark Kospi, which ended Friday at 2,056.24, the highest the primary market reached this year. Kospi rose 6.8 percent when compared to the beginning of this year.

According to the Seoul stock market operator Korea Exchange, Samsung contributed to raising the Kospi roughly 40 points between Aug. 13 and Aug. 19.

If Samsung Electronics’ share value remained at the same level as Aug. 13, Kospi currently would have traded around 2,016.

“When compared to the rise of Samsung Electronics’ shares the Kospi index’s rise is relatively limited,” said Kim Jeong-hyun, an IBK Securities analyst. “When Samsung shares have risen sharply the Kospi index failed to reach even half of Samsung’s.”

While Samsung shares have been on an upward rally, the aggressively managed active funds have seen an opposite effect as their profit shrinks. Just about 7 percent of local equity funds invest in Samsung, on average.

In fact, according to the fund evaluation company Zeroin, active funds declined 1.02 percent from the beginning of this year leading up to Aug. 19.

On the contrary, the index fund that follows the Kospi 200 index saw a 7.18 percent increase compared to the start of the year. The conservatively managed index fund invests roughly 19 percent in Samsung Electronics.

“Active fund managers have recently focused their investments on more individual stocks other than Samsung, which takes up a huge portion of the Kospi in order to increase their profit rates as the main bourse failed to go up,” said Yoo Dong-wan, NH Investment and Securities. “But as Samsung has been thriving almost on its own the active fund performance has gotten bad.”

Mertiz Korea Fund, which has no Samsung stocks in its investments, saw its profit drop nearly 13 percent compared to the beginning of the year.

But for active fund managers, increasing their investments in the Korean smartphone company is burdensome.

“It’s because it’s hard to predict whether this bullish rally will continue,” said an official at an asset management company, who requested anonymity. “But at the same time [our active fund] profit could further drop if we don’t invest [in Samsung Electronics] and the share prices keep going up.”

Analysts advise that it would be better to invest in other stocks with the potential to increase rather than focusing much on Samsung Electronics’ shares.

“Other than Samsung Electronics, other industries such as petroleum, chemical, nonmetal and airliners have seen significant improvement in its second quarter performances,” said Kim Seung-hyun, a Yuanta Securities analyst. “There’s a huge possibility that the shares of these industries will go up.”

Others advise investing in Samsung Electronics through semiconductor ETFs.

“Not only are semiconductor ETF investing substantially in Samsung Electronics, investors could also enjoy profit when share prices of other semiconductor companies rise,” said Kim Young-il, a Daishin Securities analyst.