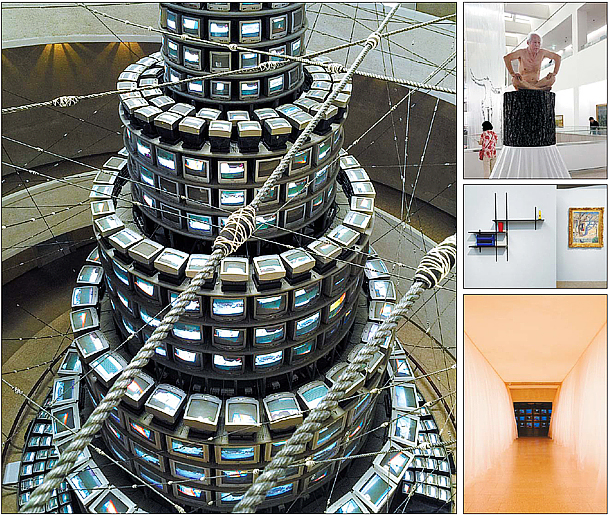 Clockiwise from above: Video art pioneer Nam June Paik’s gigantic installation “The More The Better,” which has been a centerpiece of the MMCA Gwacheon is now surrounded with rope works by artist Lee Seung-taek. It is part of the large-scale exhibition “As The Moon Waxes and Wanes,” which celebrates the 30th anniversary of the museum, that runs through Feb. 12.; Kim Kulim, a representative Korean avant-garde artist, during a performance at a press preview of the exhibition.; French artist Mathieu Mercier’s Duchampian installation of found objects in the style of Piet Mondrian “Drum and Bass” is paired with Korean artist Oh Ji-ho’s Impressionist painting due to its subtle resemblance in colors and compositions in a section of the exhibition.; Kiwon Park’s installation work “Xanadu” leads to another section of the exhibition. [MOON SO-YOUNG[MMCA]

GWACHEON, Gyeonggi - It wasn’t clear at the time, but the opening of the MMCA Gwacheon in Gyeonggi Province 30 years ago today was a significant moment in the history of the National Museum of Modern and Contemporary Art (MMCA) .

The branch was a hurried decision by the military regime to improve the nation’s cultural image before the 1988 Seoul Summer Olympics, but it also set off something much larger.

“The national museum [which was established in 1969] started systematic collection in earnest in Gwacheon,” explained Kang Seung-wan, head of the museum’s curatorial team. Now, the MMCA has 7,840 pieces of art, and 74 percent of the collection has been acquired since the opening of the Gwacheon branch, which is also now the museum’s headquarters.

Kang gave the press a preview of the branch’s newest exhibition, titled “As the Moon Waxes and Wanes,” last week. It is a large-scale show, which takes up the entire MMCA Gwacheon space until Feb. 12, to celebrate its 30th anniversary. The exhibition features 560 pieces of artwork and documents, most of which are part of the collection, while others are newly commissioned.

The exhibits range from familiar works by Korea’s most admired artists such as painters Kim Whan-ki, Park Soo-keun and video art pioneer Nam June Paik, to works that have not been exhibited for decades for a variety of reasons. The works in the former category are scattered throughout the exhibition according to their themes, while those in the latter are together in the “Re-Light” section.

Works by famous foreign artists and hot Korean contemporary artists are seen in the “Interpret Par 2 - Relation” section. This portion of the show might be the most interesting to the public as pieces are paired up using diverse themes.

One of the series by the German conceptual artist duo Bernd and Hilla Becher, famous for their photographic series of industrial structures, often called “photographic typologies,” are paired up with Korean photographer Noh Suntag’s “strAnge ball” series, which were inspired by photographic typology in format but carry a much stronger political tone.

“There is no correct answer for why the pairings were made,” said curator of the section, Lim Dae-geun. “The audience will be encouraged to express their views on the pairings on tablet computers installed in the exhibition room and to create their own pairs in this exhibitions.”

The exhibits also include the famous “Travelling Box” by French artist Marcel Duchamp, who is regarded as the early pioneer of postmodern art. It is paired up with Korean artist Kim Beom’s work.

Not only in this section but also in other sections, there are artistic dialogues between dead or old masters and living artists. Paik’s gigantic installation “The More The Better,” the museum’s monumental work, is now surrounded with rope works by artist Lee Seung-taek, who was born in the same year as Paik but has emerged in the international spotlight in the past few years.

Kang said, “The title ‘As the Moon Waxes and Wanes’ symbolizes the life cycle and destiny of a work of art - from the conditions that prompt the creation of an artwork to the production, circulation, acquisition, utilization, preservation, death, and rebirth of it.”

But to some, the exhibition may seem to be more focused on showcasing what the museum has, what the museum is doing and how the collection is inspiring the artists of the next generation.


The exhibition runs through Feb. 12. Admission is free. The museum is closed on Mondays. Go to Seoul Grand Park Station, line No. 4, exit No. 4 and take the shuttle bus.