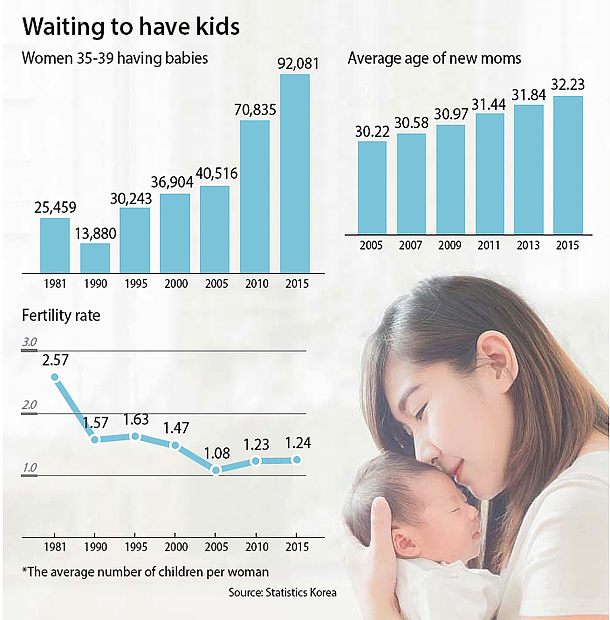 More Korean women are giving birth after the age of 35.

“It appears that more people in their 30s have babies, while the number for those in their 20s drops compared to the past,” said Lee Jee-yeon, a director at the government agency Statistics Korea. “The number of women aged over 35 years giving birth accounted for 23.9 percent of the figure for total babies last year.”

The national government spent 151 trillion won ($134 billion) in the past decade to boost the low fertility rates and address the problem of Korea’s aging society. However, the fertility rate for women ages 20 to 24 fell 4.6 percent year-on-year and 0.5 percent for women ages 25 to 29 during the same period.

The average age for new moms last year rose 0.2 years compared to the previous year to an all-time high of 32.2. The average age was highest in Seoul, 32.9 years, and was lowest in South Chungcheong at 31.4.

It took an average of 1.83 years on average for Korean couples to have their first babies after marriage, the government said. It was 4.5 years for the second child and 7.44 years for the third one.

Couples living in Seoul took the longest time to have babies in Korea last year. It took Seoulites two years of marriage to have their first child, while South Jeolla moms gave birth in 1.6 years.

Among newborns last year, there were 16,166 twins or triplets. The figure for twins and triplets accounted for 3.7 percent of the total babies, and the figure rose 0.2 percentage points year-on-year and rose 280 percent compared to 1995.

The number of newborns was highest in Gyeonggi (113,500), Seoul (83,000) and South Gyeongsang (29,500). The birth rate in the nation’s administrative city of Sejong and nearby regions rose significantly, up 101.5 percent year-on-year in Sejong, 2.5 percent in Gangwon and 2.2 percent in South Chungcheong.

Korea’s total fertility rate, or the average number of babies a woman is expected to have in her lifetime, was 1.24. Korea’s rate was the second lowest among 34 OECD countries, after Israel, according to the government. Portugal was the only country in the Organization for Economic Cooperation and Development to have fewer babies than Korea. The average rate for the OECD was 1.68.