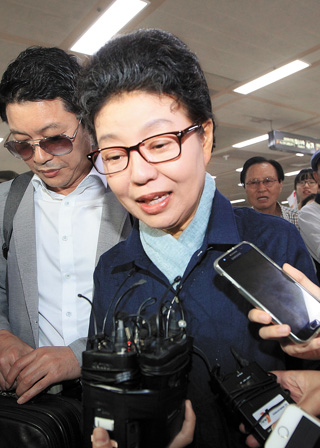 The sister of the president, and not the scandal-ridden Blue House aide, was in fact the first target of the newly established inspection system, prosecutors and law enforcement authorities have said.

Until recently, Woo Byung-woo, senior civil affairs secretary to the president, was reported as the first subject of investigation by the special inspector.

It was on the same day that Lee also launched a petition of inspection into Woo.

“Park borrowed money from a friend, but failed to pay a part of it,” said a source from the law enforcement authority. “The inspector already summoned Park to the office and questioned her.”

The alleged victim of Park’s fraud also sent a petition to Lee and testified that Park had used her status as the presidential sister when she borrowed the money.

Shin Dong-uk, Park’s husband, told the JoongAng Ilbo on Tuesday that she borrowed about 100 million won ($89,254) between 2013 and 2014 and repaid about half. “And my wife was paying interest for the remaining debt,” Shin said. “But she never bragged about her influence.”

The prosecution told the JoongAng Ilbo that Park paid back 60 million won of the debt.

“I think this is something we have to face at the end of the presidential term,” Shin said. “We just have to face it.”

Shin also said the couple has no money at all.

“We have no assets. We only have about 800 million won in debt,” he said. “We’ve already repeatedly told that to the senior civil affairs secretary’s office.”

He added, “My wife borrowed the money from a friend to pay for life expenses. Isn’t it suspicious that the person who borrowed the money is reporting her for fraud? She is just delinquent in paying the debt. She said she just received help. If this becomes a crime, there will be many charges because she must have received financial help from others.” Shin said his wife is receiving money from EG Chairman Park Ji-man, the younger brother of the president.

The Supreme Public Prosecutors’ Office sent the case to the Seoul Central District Prosecutors’ Office and the prosecution will formally proceed with a probe, including a questioning of Park.Park had already been convicted for another fraud charge last year. She was indicted of receiving 70 million won in a fraudulent deal involving the lease of Yookyoung Foundation’s parking lot. The Supreme Court ruled her guilty last December and fined her 5 million won.

President Park and her sister have long been estranged, starting with their power struggle over the control of the Yookyoung Foundation in 1990. The foundation, launched in 1969 by their mother, former First Lady Yuk Young-soo, was a charity for children’s welfare projects. President Park was the chairwoman of the foundation at the time, but a civic group criticized her and pastor Choi Tae-min, her mentor, for their dictatorial way of running the organization. The group demanded Park Geun-ryeong be named as chairwoman.

After the power struggle, the younger Park won control over the foundation. Since then, the rift between the sisters has deepened, and the younger Park has tried to derail her sister’s political path.

After Park Geun-hye lost the presidential primary to Lee Myung-bak in 2007, her loyalists were unsuccessful during the nomination process of the Grand National Party, the predecessor of the Saenuri Party, in 2008. While the elder Park was fighting against the Lee faction, the younger Park accepted the party’s offer to be in charge of North Chungcheong’s campaign and supported Lee loyalists.

In October 2008, the younger Park married Shin, who is 14 years younger, but the elder Park did not attend the wedding. In 2009, Shin was indicted for defaming the elder Park by claiming she had plotted to kidnap him and have him removed to China and murdered. Shin was ordered to serve 18 months in prison, a sentence that started in 2012.

The younger Park also tried to start her own political path during the 2012 general election, when she attempted to run in her mother’s hometown in North Chungcheong. She never won the nomination. In this year’s April general election, she also ran as a proportional candidate for a political party founded by her husband, but the party won no seats.

The younger Park also stirred a controversy last year when President Park was trying to resolve the issues concerning Japan’s wartime sexual slavery of Korean women. In an interview with Japanese media last August, the younger Park apologized to Japan because, she said, Korean media so often criticizes Japan over the wartime sexual slavery issue without Koreans themselves taking better care of these women.