Pyongyang pulls back its ambassador to U.K.

Pyongyang pulls back its ambassador to U.K. 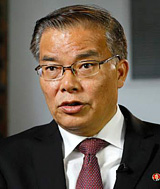 The North Korean ambassador in London has been ordered to return to Pyongyang in what appears to be punishment for the recent defection of his deputy, a source from the diplomatic circle said.

If Ambassador Hyon Hak-bong does leave the London office after serving about four and a half years, his term will fall short of the usual five-year post that North Korean ambassadors serve abroad.

The source, speaking on condition of anonymity because of the sensitivity of the matter, said Pyongyang will first ask Hyon why he failed to immediately report his deputy’s defection to authorities in North Korea. A Berlin branch of North Korea’s State Security Department, one of its main intelligence agencies, is said to be investigating Hyon and the London embassy after the recent escape of Thae Yong-ho, who made his way to South Korea with his wife and two sons.

The source said Pyongyang has officially requested for agrement from the U.K. government to appoint a new ambassador, supposedly a director-level diplomat who formerly served in the North Korean military.

Agrement is a basic protocol formality for a country that sends an ambassador or any other diplomatic appointee to ask the receiving country if it will welcome that person.

Jeong Joon-hee, a spokesman from the South’s Ministry of Unification, refused Thursday to confirm or deny the account, saying it “isn’t right” for Seoul to interfere in diplomatic relations between Pyongyang and a third country.

Another official from the Unification Ministry said he hadn’t heard about the agrement. If Pyongyang did decide to change their ambassador in London, the decision would seem “abrupt” to him, the official said.

It is unclear exactly when North Korea decided to replace Hyon or whether it has any clear-cut connection with Thae’s defection. The source who discussed the ambassador’s replacement said he would have to monitor how the regime treats Hyon when he arrives back home.

Hyon is known to have been close with North Korean Foreign Minister Ri Yong-ho and also Jang Song-thaek, the uncle and political mentor of North Korean leader Kim Jong-un. Jang was executed on anti-revolutionary and state charges by his nephew in December 2013.

Thae Yong-ho was the No. 2 diplomat at the London embassy who defected to South Korea earlier this year with his family, making headlines worldwide last week for being the most senior North Korean diplomat to ever make such a decision.

The South’s Unification Ministry said Thae’s defection was voluntary, and occurred out of sheer longing for the free world. Pyongyang branded him as “human scum” who embezzled state funds, leaked confidential government information and sexually assaulted a minor.