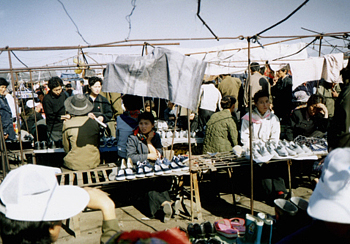 The August Coup in 1991 in the Soviet Union changed history. The opponents of reform attempted a coup to remove president Mikhail Gorbachev, who put the establishment in jeopardy by pursuing perestroika and glasnost. But tens of thousands of citizens surrounded tanks and prevented the military from entering the Russian government building where Boris Yeltsin was.

The coup failed, and the USSR collapsed. The dissolution of the Soviet Union led to 15 independent states, moving on to capitalism. As the collapse of the Soviet Union and Eastern Europe influenced each other, socialism fell and democracy and market economy were introduced in the Eastern bloc. The combination of coincidence and fate led to the biggest event in the late 20th century.

The collapse of socialism has important implications on the future of North Korea. First, the socialist system is not sustainable. As the income gap between socialist and Western capitalist nations grew and a shortage of necessities intensified, residents lost belief in the system. As their unofficial economy grew they secretly supported capitalism. Limited reform without system change led to negative consequences: the lifespan of a socialist economy came to an end.

As no policy was effective, the system became lethargic. As contacts with the Western world increased politically, people sought liberty and openness. The partial freedom the people were allowed also contributed to the collapse of socialism.

North Korea’s change is inevitable. There are hundreds of markets and trade is active. North Korea is full of energy for a systematic change. The country is like a room filled with gas. The best policy for the North is to open the window and get the air out the room by switching to capitalism. China set a good example by gradually opening the door and using the energy they had, while the Soviet Union and Eastern Europe started afresh after the gas exploded. In the long term, the North Korean regime has to choose between fighting against the market to death or compromising to change the system.

Second, the timing of the collapse cannot be predicted. The timing is determined when inevitable elements are combined with coincidental elements. Abram Bergson of Harvard University and Herbert Levine of the University of Pennsylvania are authorities on the Soviet economy.

In 1985, the two professors co-authored “The Soviet Economy: Toward the Year 2000.” Just as the title of the book implies, neither of the authors predicted the collapse of the Soviet Union, but the Soviet socialism fell six years after the publication.

In many cases, policies decided based on a premise of an immediate collapse of North Korea are helpless and sometimes dangerous.

The policymaker should not rely on incomplete information and make rash predictions because expert scholars and the intelligence agency could not predict the timing. Lately, defections of dispatched workers and high-level officials posted abroad are mentioned as a sign of collapse. But their defections are not a prelude of a fall but an outcome of the North’s flawed policies.

The North Korean regime believes that switching to capitalism would make it harder to maintain a dictatorship. Instead, they chose a relatively safe strategy of surviving by making money abroad. North Korea dispatched 70,000 to 100,000 workers to Russia and China and pockets hundreds of millions of dollars. Even diplomats work to make money abroad.

But changes in economic environment boomeranged on Pyongyang. The economic slowdown made it harder to earn money and the value of the Russian ruble and Chinese yuan fell. The North Korean authorities demand the same dollar amount so some cannot meet the demand and defect.

In fact, the overseas workers and diplomats are the weakest link of the North Korean regime. They personally have experienced the reality of the open world outside North Korea. When this objective understanding is combined with personal reasons, they choose to defect.

Seoul cannot make policies based on the hypothesis of North Korea’s immediate collapse. If the theory is used to justify pressure on the North, normalization of the inter-Korean relations would become more distant. It would be harder to talk to Pyongyang and South Korean public opinion would want to push North Korea until it collapses. A year ago, South and North Korea made an agreement after the landmine incident. In order to go back to the path leading to the North’s system change, we need to enhance the effectiveness of sanctions for now.