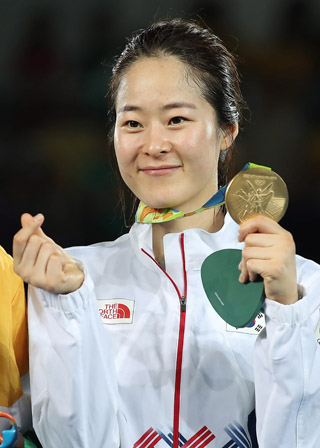 The Rio Olympics have come to an end with happy, sad, emotional and gratifying moments. On Wednesday, the main group of Korean athletes returned from the Games in Brazil. Their dramatic feats of sport from the other side of the globe for 17 days gave Koreans temporary respite from the hot and humid tropical nights.

As I fed victories coming in from Rio de Janeiro as breaking news, one captured my attention. It was not the masterful putting of golfer Park In-bee or the tears of football player Son Heung-min, but it was Oh Hye-ri, who won gold in women’s 67-kilogram taekwondo and posted “Pygmalion” as her social media profile status.

In Greek mythology, Pygmalion was a sculptor and king of Cyprus. He created a sculpture, named it Galatea and fell in love with it. When Aphrodite, the goddess of love, learned of Pygmalion’s affection, she breathed life into the sculpture, and Galatea became alive.

Pygmalion has since become a symbol of self-fulfilling prophecies, in which hopes and dreams can come true for those who wish hard enough.

In psychology, the Pygmalion effect refers to the phenomenon of positive expectations and attention leading to good performance. A song titled “Together” from the soundtrack of the popular Korean television series “Reply 1988” became very popular last year because it contained the hopeful message, “We will be happy someday for sure.”

Oh had long been considered a second-place athlete and derided as a “domestic athlete.” For her, Pygmalion must have been a lifeline providing hope. In the 2008 Beijing Olympics, she did not make the national squad. Before the 2012 London Olympics, a muscle injury frustrated her chances.

The third challenge this time must have been frightful. She may not have had conviction that she would have a shot at the Olympics. But she constantly reminded herself that she could do it. She encouraged and motivated herself and reached her dream by reiterating “Pygmalion.”

How would young Koreans living in “Hell Joseon” react to Oh’s Pygmalion effect? Would they agree and say, “If I work harder, I can succeed someday,” or would they say, “That’s so far from reality. The glass ceiling has been replaced with a concrete ceiling. It does not apply to young people struggling for survival like us.”?

Oh’s success might be a rare case. It is true that climbing up from a humble background is very hard. But we should not neglect the power of positive thinking. Helen Keller was deaf and blind, but even she said, “Although the world is full of suffering, it is also full of the overcoming of it.”

Best-selling author Anne Lamott says, “Almost all good writing begins with terrible first efforts.” The quote is still valid if you replace the word “writing” with “youth.” Tea leaves become more fragrant when you crush them. The sweat in Rio proves it.


*The author is deputy editor of EYE24.