Stock purchases on credit are up

Stock purchases on credit are up 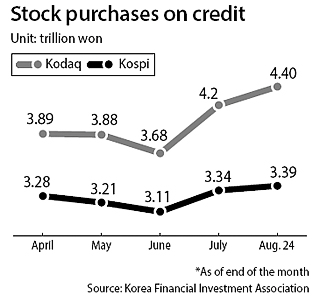 Korea’s stock purchases on credit, or stocks bought with borrowed money, accumulated to nearly 8 trillion won ($7.18 billion) on Friday, hitting an all-time high this year as more retail investors invest in local stock markets by taking out more loans due to the low interest rates here in Korea.

According to the Korea Financial Investment Association, the accumulated balance recorded 7.79 trillion won on Friday. The balance fell to the lowest point this year at the end of June at 6.73 trillion won, but has only gone up since then.

The growth rate is bigger in the secondary Kosdaq market compared to the benchmark Kospi, and experts believe the slow economic growth rate and low interest rate are two main reasons for the increase in credit purchases.

“There aren’t that many places for people to pour money into due to the slow economy and low interest rate,” said Kim Yong-koo, a researcher at Hana Financial Investment. “In the past, the increase in credit purchases was seen negatively, since it means Koreans would have more debt in general, but I see it neither positively nor negatively because people always find ways to invest their money. And I believe people are borrowing more to invest in the stock markets since they expect it will have higher returns compared to investing elsewhere.”

Kim said stock purchases on credit are growing in the Kosdaq market, since investors are investing in newly growing industries and technologies, instead of investing in those that have already been successful in the market such as Samsung Electronics.

“One thing that investors should be careful of is that security firms can sell their customers’ shares if the stock market tumbles in order to protect their principal,” said Kim.

Meanwhile, the Bank of Korea lowered its key interest rate from 1.5 percent to an all-time low of 1.25 percent in June. And some analysts believe that there is a possibility of the central bank further lowering interest rates as early as next month, which would allow more investors to find other ways to invest such as with stock purchases on credit.