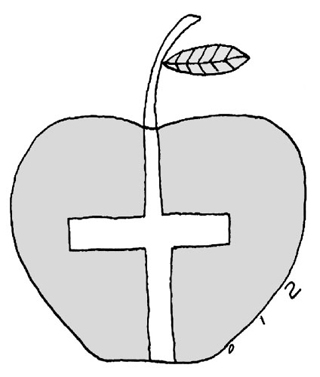 The first human beings, Adam and Eve, ate the fruit from the Tree of Knowledge of Good and Evil and understood shame. After eating this forbidden fruit they were aware of sin, so they picked some leaves from the tree and covered their naked bodies. One after another, Adam and Eve’s descendants inherited this original sin and were born into the world.

Aren’t you curious how Adam and Eve were before eating this forbidden fruit? What kind of people were they? In the Bible it says that God made Adam and Eve in his own image. There was no difference at all between the two of them and God — they were one. All of the world’s creations were within God, and God also existed within all creation; the first human beings were surely like this.

The forbidden fruit made human beings separate from God, as they became aware of sin — it became difficult for people to find God within themselves. It says in the Bible that Christ came to the earth in order to heal this separation between God and humanity.

Take a close look at the type of person mentioned in the Sermon on the Mount — one who is poor in spirit, meek, merciful, and pure-hearted. Who does this resemble? That’s right, it sounds just like the very first human beings before they ate the forbidden fruit. Christ’s message in the Sermon on the Mount was that we should return to the way humanity was before good and evil arose, with a poor, meek, pure and merciful heart.

Though this fruit was originally without any duality, people divide it into the fruit of virtue and the fruit of evil. They then preach that some thoughts or actions are immoral, so one must repent! Many therefore expend excessive amounts of energy in prayer, begging for forgiveness, and attempting to rid themselves of this fruit of immorality.

Our typical attitude towards the fruit of virtue is completely different, however. “This month I kept all the commandments. I’m so proud of myself — today I helped our poor neighbors. God must know how many donations I’ve made to the church.”

Christ taught, however, that after one eats the fruit of virtue there should be no traces at all left in the heart: “When you perform acts of charity, don’t let the left hand know what the right hand does.”

This is not just saying that we should do something without others knowing — we should not even know in our own hearts. Virtuous actions should always be done without any trace whatsoever. Good and evil both become one when all traces of these fruits are removed — we can thus return to the original state of humanity, before good and evil arose.