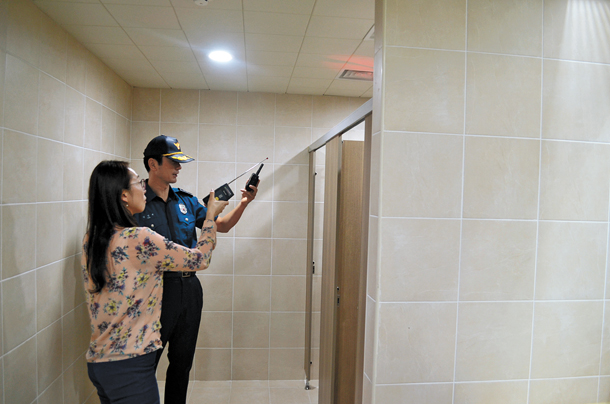 The Korean swimming community is under fire as controversies and scandals involving swimmers and its officials are being exposed in rapid succession. While former and incumbent national team swimmers are embroiled in a hidden camera scandal, a coach for the Olympic swimming team is under investigation after he allegedly assaulted a passer-by on Sunday while drunk, according to local police.

On Sunday, police said they are investigating a former national team swimmer for allegedly installing a hidden camera in the women’s locker room of a high school from Dec. 2009 to April 2010. The swimmer has already been under police investigation for installing cameras in the women’s locker room of Jincheon National Training Center in Jincheon, North Chungcheong, to take photos of his female teammates since 2013, when he was on the Korean national team. The athlete in question competed at the 2012 London Olympics but failed to make the team for the 2016 Rio Olympics. Police have also seized the suspect’s laptop to find additional evidence.

Police said that he admitted to the charges and also said he committed the act with the help of a fellow athlete, a swimmer who participated at the Rio Games. The Rio Olympian is currently serving his mandatory military duty with the Korea Armed Forces Athletic Corps, the sports division of the Republic of Korea Armed Forces. Police have handed over the case to the military police. The suspect is denying the charges.

The Korean Olympic Committee (KOC) has organized a special investigations unit in response to the case. The unit and Jincheon police conducted on Monday a detailed inspection of the bathrooms and locker rooms of the Jincheon National Training Center. “We will improve our sexual harassment prevention training,” said an official of the KOC, who later added, “We will also reprimand and discipline whoever is involved in the case.”

But it’s not just the athletes who are behaving badly. One of the coaches who just returned from Rio is under investigation by police after allegedly stealing vehicles and assaulting a passer-by on Sunday, according to police.

The police said the suspect stole a van while drunk, which he crashed at a nearby farm. He then stole an SUV, which he left in a restaurant parking space. While roaming the street, a passer-by spotted the suspect, who was injured from the previous accident, and tried to help him. The suspect physically assaulted the person and ran away. The suspect’s blood alcohol content when police apprehended him was .172 percent, the level at which one’s driver’s license can be revoked.

But this is only the latest in a swamp of controversy in which the Korean swimming community is slowly sinking. In February and March, three Korea Swimming Federation (KSF) officials were indicted by prosecutors on charges of embezzlement, bribery and negligence of duty. Some high-level KSF officials allegedly funneled money out of the organization’s budget and skimmed government funds while others took bribes in exchange for influencing the selection of national team swimmers and favoring certain companies in a facility-approval process.