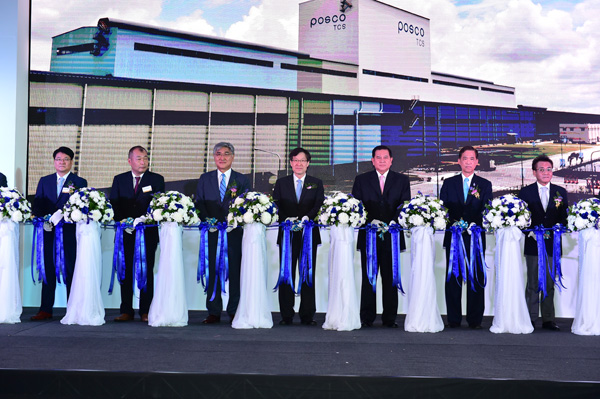 The new plant in Rayong Province, Thailand, was constructed as Posco tries to strengthen its automotive steel sheet business globally. Automotive steel sheets are among the most valued and profitable steel products that only 20 out of some 800 steelmakers can produce, according to the company. Posco-TCS (Thailand Coated Steel) factory is capable of producing 450,000 tons of zinc-coated steel sheets for use in automobiles.

“The Korean steel market is more than saturated and we are looking for chances in the overseas market especially in the Southeast Asian region where the market still has big growth potential,” said Posco CEO Kwon Oh-joon, at a press conference at the Conrad Hotel in Bangkok on Wednesday morning prior to the celebration ceremony.

Thailand is now the 12th largest automotive producer in the world, according to the International Organization of Motor Vehicle Manufacturers. Among Southeast Asian countries, it is the biggest production base, accounting for 50 percent of car production in the region, producing 2 million cars annually. The country serves as a production base for global carmakers including Toyota, Nissan and Ford.

Thailand’s role as the largest auto producing country in Southeast Asia is expected to grow. Ten countries started Asean Economic Community last year to launch a single market for trade and lower tariffs. The alliance will be supported by the Thai government, which is fostering environmentally friendly car development.

To grab the massive Thailand market, the steelmaker started construction of the factory in September 2014, investing about $300 million.

In Thailand, Posco has already been operating a stainless steel sheet plant with an annual 220,000 tons of production capacity and Posco-TBPC, a steel processing center that has the capacity to process 360,000 tons of steel. The new plant will target global automakers, especially Japanese, operating factories in Thailand.

However, challenges remain for the steelmaker as competition heats up, especially with Japanese steelmakers being the first to move to the country.

“Though Japanese steelmakers are already present, Thailand’s steel demand exceeds supply and we will expand our market share through building strategic partnerships with global automakers operating in the country,” the company said in a statement.

The Thailand factory is expected to increase Posco’s overseas automotive steel production capacity to 2.25 million tons a year. The company also has factories in Mexico, China’s Gwangdong Province and India.

Regarding recent issues on stricter trade restrictions, such as antidumping duties, Kwon said, “Trade restrictions can exist in any circumstances but we will cooperate closely with the Thailand government from the beginning so no such restrictions are imposed.”