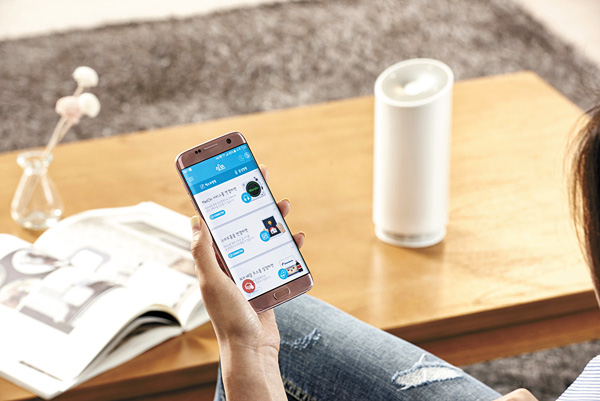 SK Telecom has unveiled an artificially-intelligent speaker that is able to recognize a user’s voice commands to play music, order products over the Internet and launch home devices such as TVs and air purifiers.

Named Nugu, meaning “who” in Korean, the cylindrical voice-enabled wireless speaker is based on artificial intelligence and deep learning so it could evolve over time. For now, it can only process Korean for sentences, or natural language, but can understand foreign words, according to the company.

Global IT giants such as Amazon and Google have been rushing to develop and commercialize AI for future growth, which is why the nation’s No. 1 mobile carrier is jumping in ahead of the various AI convergence in Korea. Faced with saturated growth in the telecom market, mobile carriers, including SK Telecom, have been diversifying their business portfolios in search of a next-generation growth driver.

“The means of device input has evolved from keyboard to mouse and touchpad, bringing huge changes to our daily life,” Park Il-hwan, executive vice president of the device supporting division at SK Telecom, said at a news conference on Wednesday. “We believe voice recognition will be the next most dominant means of input, given that users do not need to learn to use it and it is very natural. Voice is emotional, context-based and sometimes unpredictable. Since AI works not within the device but from the cloud, the price could get much cheaper.”

Asked what differentiates Negu most from Amazon’s Echo, which was released in November 2014, SK Telecom cited its aesthetics and quality of sound. The all-white speaker has a microphone mounted at its top and is equipped with an LED light that changes color depending on the atmosphere. It is 22 centimeters (8.6 cm) tall, 9.4 centimeters in diameter, and weighs 1,030 grams (2.27 pounds).

Given that the device becomes smarter as more people use it, SK Telecom plans to attract early adopters to help the device evolve by offering it for 99,000 won ($89), 60 percent off the original price tag, until the end of October. The price will rise incrementally. From November through the end of December, the device will cost 149,000 won and starting next year, 249,000 won. It goes on sale today.