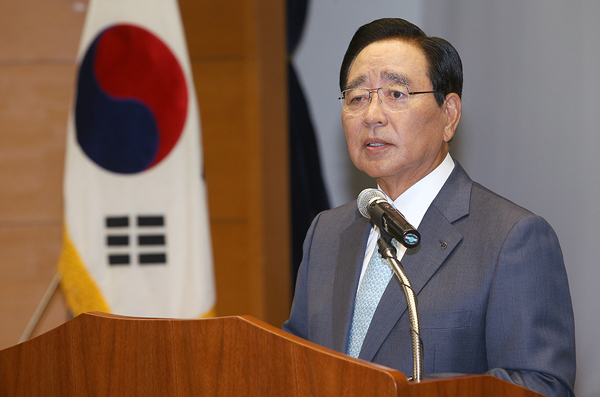 The announcement comes as the financial industry sees increasing challenges from tech companies entering the sector and lower commission fees on brokerage services and card transactions.

Shinhan Financial Group’s chairman highlighted the importance of adopting the latest technology such as iris scanning to remain competitive.

“Digitalization in the financial sector has become something of the general trend that we cannot resist,” Han Dong-woo said during the ceremony at the group’s headquarters in central Seoul.

During the announcement, Han also vowed to expand Shinhan’s global presence with a localized approach.

“We should win over customers overseas by increasing our competitiveness based on the understanding of local markets,” he said.

The vast majority of Shinhan’s current revenue comes from home, with overseas revenue accounting for less than 10 percent. In the short term, the group hopes to expand to neighboring countries in Asia such as Indonesia and Vietnam.

On the group’s management of investment portfolios, Han called for a more “dynamic risk management culture.”

“In terms of asset management, we need to broaden the range of investment portfolios,,” he said, “avoiding inherent risk-averse tendencies.”

Despite unfavorable economic conditions, Shinhan has managed to see profit growth this year.

The group’s net profit stood at 28.8 billion won ($25 million) in the second quarter, a 32.2 percent increase from the previous quarter thanks to an improvement in the net interest margin.