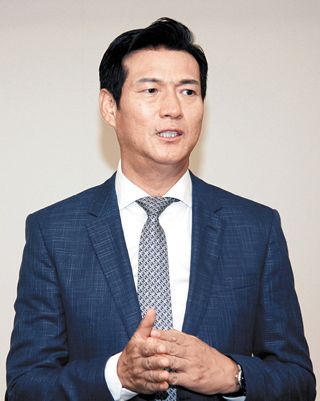 FUKUOKA, Japan - Cho Kil-soo, president and CEO of Diageo Korea has pledged to make whisky the go-to drink for Korean millennials, perhaps shoving aside the long-reigning dominance of soju.

The Korean operation of Diageo, the world’s largest alcoholic beverage manufacturer, is best known for distributing Johnnie Walker and Windsor, among others, and currently leads the local whisky market.

“People in their 20s and 30s haven’t had their own go-to drink for quite a long time,” said Cho at a press meeting held Friday in Fukuoka, Japan.

“Soju has been the most popular alternative choice but that is because it has been the cheapest and most widely distributed option out there. I don’t think soju can be the drink that represents the millennial generation. We will vie to take the spot by trying out new marketing strategies and innovations in our products.”

In order to do that, Cho, who also oversees the British liquor company’s business in Japan, said that taking a look at Japan’s vibrant whisky culture - as seen by the highball, a mixture of whisky with water or soda and the various bars dedicated to the mixed drink - is necessary.

“Korea and Japan’s liquor industries are not exactly the same, but there are parts we need to learn from, like how Japanese liquor businesses dealt with the plunging popularity of whisky in their country,” Cho said.

Korea’s whisky industry has been plunging for the past decade and still struggles from shrinking market share in local liquor industry, largely due to the old-fashioned image associated with the strong liquor and the high price tag, which deters young people with not a lot of money to spare.

On the other hand, Japan’s consumption of whisky also struggled for quite a long time - falling by as much as 72 percent between 1988 and 2008. Thanks to the efforts of the Japanese whisky distributors, the drink was able to rebound, selling 14.6 million units in 2015, a 75 percent increase from 2008.

Since 2011, the Japanese whisky market has grown annually by an average of 8.1 percent.

According to World Health Organization’s data, consumption of spirits in 2014 accounted for 52 percent of all alcoholic beverages in Japan, while in Korea, it only accounted for 2.9 percent.

In order to move away from the out-of-style image of the strong caramel-colored liquor, Japanese whisky distillers began marketing the product through TV commercials and dramas as “hip” and “trendy” drinks in 2009, led by local whisky giant Suntory. According to the company, the marketing strategy resulted in an increase of highball-selling bars from 15,000 to 40,000.

Another element Cho emphasized was the “relevancy” the drink has with young people in Korea.

“The younger generation thinks the drink belongs deep inside the closet or on the shelves for display purposes,” the Diageo Korea CEO explained.

“We need an innovation to break through that stigma and we are planning to do that with Johnnie Walker.”

In mid-October, Diageo Korea plans to launch a 200-milliliter (6.76 oz) bottle of Johnnie Walker Red Label which will be distributed across all possible channels, from the retail market to casual bars - aimed at millennials with its cheaper price tag.

Its flagship bottle has been the 700-milliliter container which was introduced in the mid-20,000 won ($18) range.

“Diageo Korea will strive to make whisky an easy and casual alcohol that can be consumed by all demographics, focusing on the ever-changing drinking trends of young people.”