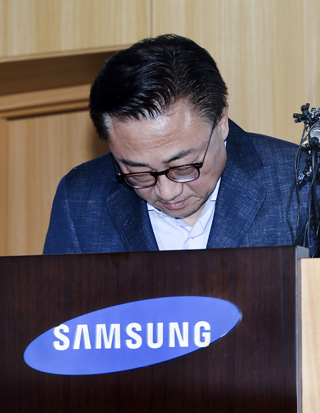 Samsung Electronics’ mobile business president Koh Dong-jin promised last week to replace all the newly released Galaxy Note7 phablets with new ones regardless of the timing of purchase. [NEWSIS]

A recall for Galaxy Note7 was inevitable. Samsung Electronics made the right move by taking quick action. Users would have been constantly anxious of a built-in battery blowing up in smartphones they carry around. In fact, deadly accidents could happen if the battery catches fire while sleeping. This is entirely different from the faulty issues of bend-gate and death grip in iPhones as it concerns consumer safety.

All famous recalls have been related to safety risks. Johnson & Johnson took immediate action and recalled all 31 million bottles of Tylenol when the extra-strength capsules killed eight people in Chicago in 1982. It cost the company $240 million, but the reputation of the household pain-killer was sustained.

In the case of Firestone tires, its maker recalled 6.5 million branded tires in 2000 after they were involved in hundreds of accidents and as many as 47 deaths. U.S. regulators demanded action after concluding that defective tires caused the dozens of deadly accidents.

Bridgestone, which had acquired Firestone, denied and underplayed the danger and ended up facing multiple lawsuits and a federal investigation.

When a photo of a melted Galaxy Note7 was posted on the internet on Aug. 24, Samsung Electronics thought it was a prank by a hostile consumer. The electronics giant had won a lawsuit that ended in a prison sentence for a consumer who lied about an exploded Samsung phone that actually had been placed in a microwave oven to dry out after having been dropped in the toilet. A lawsuit against a blown-up LG Electronics phone also ended in a fine of 15 million won ($13,560) for the plaintiff. But photos of similar battery explosions of Galaxy Note7s went viral on various Internet platforms in the following days.

Samsung Electronics thought about the consequences after Toyota, Volkswagen, and Oxy dithered in consumer actions about serious product defects that were hazardous to public safety. Toyota paid more than 1 trillion won in a recall program and Volkswagen Group has been shaken by a diesel emission-rigging scandal.

Samsung had all its technicians investigate the cause of the explosions. In nine days, the company announced that it would recall all 2.5 million units sold. Working-level officials suggested that the company exchange just the defective batteries, but top executives ordered all the phones be exchanged for entirely new ones. “To ease public concerns, a complete recall was the only solution,” said a Samsung official.

The recall would cost the company more than 1 trillion won, but the electronics giant would take advantage of the second-quarter operating profit of more than 8 trillion won to meet any consumer demands for a refund or exchange.

The incident could become another tipping point for Samsung. The company in 1994 recalled all 150,000 of its first-ever wireless phones after defects were reported and then burned them all up to demonstrate their commitment to quality control. The latest action is also aimed to defend the company’s commitment to quality control and consumer confidence. Its efforts were well-paid as shares rebounded after the announcement. But we advise the company not to burn the recalled phones this time as that could be hazardous to the environment. The parts should instead be recycled.

The case with Galaxy Note7 provides a valuable lesson. Once a company goes global, its risks also could be global. Defective products and actions by suppliers around the world could bring huge costs to the manufacturer. Accidents and damages are immediately posted on the internet and spread globally. A black-box video recording can ruin an automaker. The world has no mercy for even one tiny mistake.