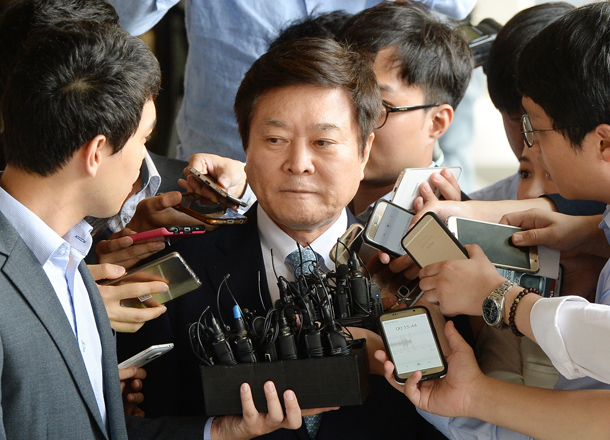 So Jin-sei, head of external relations at the Lotte Group, is surrounded by reporters on Monday before entering the Seoul Central District Prosecutors’ Office in southern Seoul, where he was summoned to answer questions on his involvement in the group’s slush fund and other corruption charges. [JUN MIN-KYU]

In response, the SDJ Corporation where Shin’s eldest son, Shin Dong-joo, is the CEO, requested that the prosecution hold the questioning at the 94-year-old founder’s home or office, or in written format, citing his old age and weak health as reasons.

The prosecution probe into the corruption scandal of the Lotte Group hit a slight setback after the recent death of its vice chairman, but is gaining speed again, as prosecutors also summoned on Monday So Jin-sei, head of external relations at Lotte Group and close aide of Chairman Shin Dong-bin.

The Lotte Group is accused of running slush funds worth at least 56 billion won (about $50 million) since 2002 at Lotte Engineering and Construction and restricting business opportunities to the group’s affiliates. The family of Shin Kyuk-ho is also accused of evading taxes totaling some 300 billion won. So was summoned to testify last month, but evidence surfaced of his involvement in a recapitalization process of Lotte PS Net, an electronic banking service provider, and prosecutors are summoning him as a suspect this time.

Lotte Group is suspected of forcing its affiliated companies to participate in the recapitalization process from 2010 to 2015, whereby some 36 billion won was created in total.

From 2010 to 2014, So was the CEO of Korea Seven, an affiliated organization of Lotte Group that, together with the group, runs the 7-Eleven stores in Korea. Prosecutors will question So on the extent to which he and Chairman Shin Dong-bin were involved in the recapitalization process.

So will also be questioned on the Lotte Group’s slush fund and the Shin family’s tax evasion charges.

“There is no slush fund at the Lotte Group,” So told reporters before entering the Seoul Central District Prosecutors’ Office on Monday. “Nor was there a direction from Chairman Shin [to restrict business opportunities to the group’s affiliates].”

So, along with Hwang Kag-gyu, president of policy coordination at Lotte Group, and deceased Vice Chairman Lee In-won, were often called the “Big Three” of the group. They have been in charge of many of the operations of the group and worked directly with Chairman Shin Dong-bin.

Since Lee’s suicide was discovered on Aug. 26, a few hours before his questioning by prosecutors, So and Hwang have taken on Lee’s role, according to Lotte Group representatives.

Hwang will also be summoned this week, prosecutors said, though his summoning schedule will be kept private. This will be the second time he has been summoned.

So began working at Lotte Shopping in 1977 and rose through the ranks to become head of Lotte Department Store’s flagship store in Jung District, central Seoul, head of Lotte Department Store’s Product Headquarters and Marketing Division and CEO of Korea Seven and Lotte Super, before becoming the head of external relations at the policy coordination department of the Lotte Group. According to prosecutors, Chairman Shin Dong-bin and his brother, Shin Dong-joo, will be summoned in the near future.