Pushing 40, Kim is still making records and looking ahead

Pushing 40, Kim is still making records and looking ahead 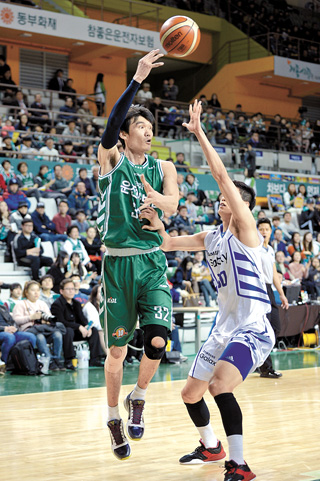 Kim Joo-sung, left, says he does not want to retire from the game yet, as the veteran hopes to leave his mark in the history of Korean basketball. [KBL]

It has been over a decade since Kim Joo-sung joined the Korean Basketball League (KBL) straight out of Chung-Ang University in 2002, and what a career the 36-year-old center has had since then. Not only is he the first basketball player to tally over 1,000 blocks, but he is ranked second in career rebounds and third in scoring. And even now, as he pushes 40, his time on the court is still far from over.

“Retirement? I got things to do,” said Kim when the JoongAng Ilbo met him in Kawasaki, Japan, where Wonju Dongbu Promy is currently in off-season training.

“I played with Huh Jae for three seasons after my debut,” recollected Kim. “Heo Ung [Huh Jae’s son] used to visit the court and follow me around, calling me ‘uncle.’ Now, I have been playing with him in the pros for three seasons. How time flies.”

Throughout his career, Kim has stuck with the Promy for better or for worse, leading the team during in 2007-08 season when the team topped both the regular season and the playoff. Standing at 2.05 meters (6 feet 8 inches), Kim was the big man that the Promy could count on under the basket. But even Kim, who is considered one of the best centers the KBL has ever seen, is not immune to the injuries that accumulate over the years. “I tore a ligament in my left knee last season,” Kim said. “I would lay down in bed but sleep often eludes me as worries of retirement come rushing back. I have always thought I would retire once my body stopped working, but luckily my physical condition is getting better.”

Nevertheless, this coming season is likely to be the veteran’s last, as his contract with the Promy will expire at the end of the season. “When I look at Lee Seung-yuop of the Samsung Lions (40 years old), I cannot help but be amazed,” said Kim. “Despite his age, he keeps himself in top physical shape, rewriting records left and right.”

Kim added, “I hope I can help out the younger players this season and teach them a thing or two. If possible, I would like to extend my contract for one more season and retire just before 40. It would be an honor if I could help the team win and personally, I want to tally 10,000 career points (currently he has 9,497 career points).”

As a center, Kim’s main opponents under the basket were foreign players, a majority of whom take up the positions of power forward and center. Physically capable and strong, boxing them out for rebounds and posting up against them inside the key took a heavy toll on his body. “I often fell down,” he said. “I was just trying to survive, but I guess it was seen as weakness and disappointed some fans. But, I would like wrap up the remainder of my career well so fans would have good memories about me.”

Indeed, his sacrificial plays under the basket were not limited to his career with the Promy. Since his freshman year in college, Kim has played for the Korean national team for 17 long years. Even with incessant injuries, he made himself the only male basketball player to have two Asian Games gold medals, one from 2002 and the other from 2014. “At one point, I played in more than 70 games in one year including the national team games,” Kim explained. “I remember waking up in the Taeneung National Training Center one day and the Promy training center the next.”

He added, “If someone forced me to do such a thing, you could call it exploitation. But I did what I did willingly. I was happy and I played with wits and grits.”

While many call Kim the pillar of Korean basketball, he shakes his head at this. “I remember playing in the 1998 Asian Games in Bangkok when I was a freshman in college,” Kim said. “I remember being simply stunned to play alongside seniors such as Seo Jang-hoon and Moon Kyoung-eun. I was so nervous they called me ‘clumsy.’ I am not a player to mark a page in the history of Korean basketball. I would be more than satisfied if anyone briefly mentions my name when they talk about great players of the past.”