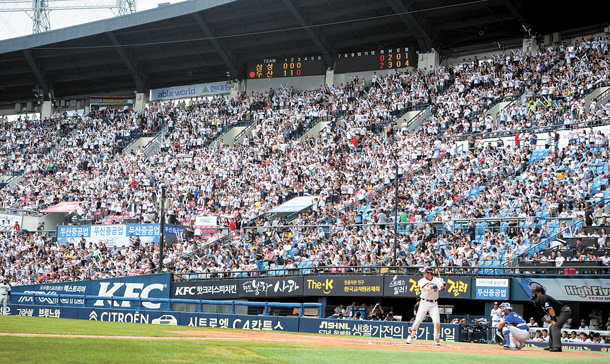 Jamsil Baseball Stadium is packed on Sunday during the game between the Doosan Bears and the Samsung Lions. On Sunday, the total number of fans attending KBO games this season exceeded the 7-million mark. [NEWSIS]

The Korea Baseball Organization (KBO) recently faced a series of difficulties that could have dented its popularity among domestic fans. Amid the 2016 Rio Olympics and the game-rigging scandal, however, the KBO still managed to weather the storm and on Sunday, it finally reached the 7-million mark in terms of the number of spectators the KBO hosted this season, a feat accomplished for the third time in KBO history.

As of Monday, 7,035,408 people made their ways to nearby stadiums to root for their teams. The KBO has already played about 84 percent of its games, and compared to the same period last season, during which a record high of 7,360,530 spectators attended games, the number has seen an increase of 82,000. On average, 11,629 people a day attend KBO games, so it’s not unrealistic to imagine that it could once again break the record and host more than 8 million fans this season.

This comes in the midst of a number of problems that could have hamstrung the industry. Not only was the league plagued by game-rigging scandals in July, but there was also the Rio Summer Games in August, not to mention the record-breaking heat wave that blew across the country. Still, the popularity of ball games remained high and eventually overcame the odds, as could be seen in August during the Olympics when the crowd actually increased by about 60,000 compared to last year, a stark contrast compared to the past, when the size of the crowds shrank during Summer Games.

One of the main reasons behind this year’s success is the volatililty and unpredictability seen in the league, with no one able to reliably predict what the playoffs will look like. Starting last year, five teams, including a wild card, are playing in the playoffs. This year, while the defending champs, the Doosan Bears, the NC Dinos and the Nexen Heroes seemed to have secured their spots, the battle among other clubs for fourth and fifth place is fierce. For instance, the KIA Tigers and the SK Wyverns, ranked fourth and fifth as of Monday, have seen their rankings fluctuate from fourth to sixth this season. The Tigers, Wyverns and the LG Twins are only two to three games apart, which means any one of them could make it to the postseason stage.

The establishment of a new ballpark also seems to have played a significant role. The Samsung Lions have settled into a new stadium, Daegu Samsung Lions Park, this year and have seen a 67 percent increase in crowd size. The Heroes, who play their home games at the Gocheok Sky Dome, have seen 53 percent growth. In addition, clubs are offering fans more than just baseball games at their stadiums.

KT Wiz, 10th in the league, has introduced an innovative way to watch games using virtual reality (VR) technology. The system offers a 360-degree view of the stadium. Cameras are installed behind the home plate, next to the home team dugout and next to the away team dugout. Each location is equipped with five cameras, which can capture the grounds and bleachers without any blind spots. The video is transmitted to a broadcasting van outside the stadium, and then to Wiz fans around the world, who can watch the available clips on their smart devices.

While there are still two weeks to go before the end of the regular season, the weather is cooling down and more and more fans are expected to visit nearby stadiums to enjoy baseball games. At this pace, the question is not whether the KBO will see new records in the number of fans, but by how many it will top the previous record.