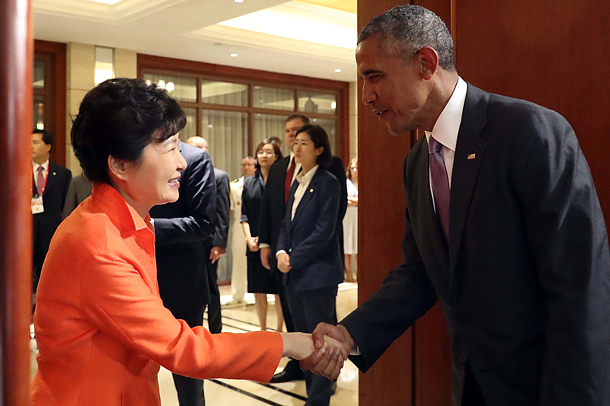 President Park Geun-hye issued a message to the people of North Korea on Tuesday, saying they would be guaranteed equal opportunities after unification.

Park made the comment in a joint press conference following a summit with U.S. President Barack Obama in Vientiane, Laos.

The meeting, originally scheduled for today, took place Tuesday after the American leader canceled a meeting with Philippine President Rodrigo Duterte, who had publicly called Obama a “son of a bitch.”

Since her Liberation Day address in August, Park has made clear she will treat the North Korean people and the Kim Jong-un regime separately. She urged North Koreans to join her initiative of unification.

She said South Korea and the United States agreed to continue communicating with China through various channels because China’s role is crucial to effectively implement sanctions on the North and resolve the nuclear crisis on the peninsula.

Obama said Monday’s missile launches by North Korea were provocative and that the United States would work with allies to bolster sanctions on Pyongyang.

The 50-minute summit took place shortly after the two leaders arrived in the Laotian capital to attend a series of regional summits for the Association of Southeast Asian Nations (Asean).

Earlier in the day, Obama canceled a planned meeting with Duterte following his vulgar remarks.

“President Obama will not be holding a bilateral meeting with President Duterte of the Philippines this afternoon,” National Security Council spokesman Ned Price said. “Instead, he will meet with President Park of the Republic of Korea.”

On the eve of his meeting with the American president, Duterte said he would not be lectured by Obama on human rights. The Philippine president, whose campaign against illegal drugs and drug pushers has resulted in thousands of deaths, called Obama a “son of a bitch” in Tagalog.

Obama then expressed doubts over the constructiveness of the meeting and decided to meet Park instead.

It was Park’s first meeting with Obama after Seoul and Washington decided in July that the U.S. military would deploy a powerful antimissile system in South Korea to counter nuclear and missile threats from North Korea.

The summit came one day after the North’s latest firing of three missiles to demonstrate its improved capabilities.

According to diplomatic observers, the Park-Obama meeting will likely be their last bilateral talks before Obama leaves office.

While Seoul and Washington have repeatedly stressed that the defense system is meant to deter Pyongyang’s nuclear and missile provocations, Beijing and Moscow have shown concerns that its powerful radar will be used to spy on them.

In their joint press conference, Obama also defended the decision to deploy Thaad in the South, stressing that it is a pure defense measure against the North’s threats. He said the North’s provocation is not only a threat to the South but also to the United States and its allies.

Park will have a meeting with Japanese Prime Minister Shinzo Abe today on the sidelines of the Asean conference. Regional security issues, particularly the two countries’ cooperation to counter the North’s provocations, are expected to be addressed.

During her trip to Laos from Tuesday to Friday, Park will attend Asean events and an East Asia summit. In addition to the 10 Asean members, leaders of China, Japan, South Korea, Australia, India, Russia and the United States are gathered in Laos for the conferences.

On Friday, Park will have a bilateral summit with Laos President Bounnhang Vorachith.