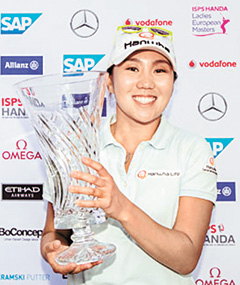 Kim had been consistent, keeping herself near the top of the leaderboard throughout the tourney.

But the 28-year-old veteran had an especially solid day on Sunday, nabbing nine birdies to climb from the third spot after the third round to the top of the leaderboard.

“I really wanted to shoot something lower than 63,” Kim was quoted as saying by the Ladies European Tour (LET) official website, “because I have shot 63 before, but that is something I cannot control. I had a lot of chances today. I did my best on every shot from the first day and today it just kind of came together with some good putts. I had 26 putts today. Yesterday I hit the ball, as well, but the putts didn’t fall.”

While the tourney itself may be smaller in scale compared to the U.S.-based LPGA, the win has more meaning than meets the eye.

After Kim claimed three LPGA titles from 2008 to 2010, she went through a dry spell, claiming no wins in the U.S.-based competition. She nearly had a chance to seal her first major championship during the 2012 Kraft Nabisco Championship. However, she lipped out a one-foot putt that could have secured her win and eventually gave up the title to Yoo Sun-young through a playoff. That was when Kim fell into a protracted slump.

This season was the worst of all. Out of 13 tourneys, she had no notable results to show for them, except one top-ten finish in June. Now, she is ranked 79th in the Official Money rankings.

Without much luck in the LPGA, she has been calibrating her shot in other stages for the past few years such as the European Tour. In 2014, she won her second LET in the same event as Sunday at 2014 ISPS Handa Ladies European Masters.